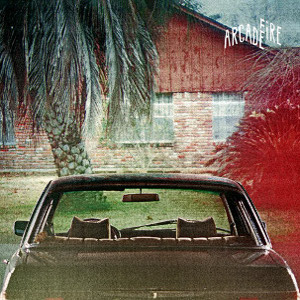 Of course, Arcade Fire’s breakthrough debut album was all about the suburbs, with four songs on Funeral called ‘Neighbourhood’. So on this new 12” from the band we see a return to Win Butler’s fondness for communities, and how they interact.

People are obsessed with the idea of the suburbs being sinister. From Revolutionary Road to Desperate Housewives via Tim sodding Burton, people assume that the only way to make the suburbs interesting is to introduce some sort of subversive darkness bubbling underneath the superficial, happy surface.

Win Butler joins in with this tradition. He combines the two typical views people have of suburbs: boredom and derision. Musically, it’s one of the brightest songs Arcade Fire have ever produced: sort of lackadaisical honky-tonk, toe-tapping its way out of the daily grind and into pastures new. The lyrics consist of platitudinous half-meanings that only North American rock bands ever manage to do properly. “Sometimes I can’t believe it / I’m moving past the feeling” goes the chorus, and elsewhere we get stuff like “in the parking lot we’re still waiting / it’s already past.”

But the song is good. Arcade Fire have a way of making ghostly indie rock that brings meaning out of meaninglessness. There’s a Rufus Wainwright lyric, “I’m tired of writing elegies to boredom.” But this is what Arcade Fire have been doing their whole career, and it’s yet to grow old. ‘Suburbs’ is a good example of this. By giving us a swirl of confused, open-ended lyrics, we’re left feeling like you do when you live in a suburban place. Nothing’s really going on, nothing shocking will ever happen, you know you’re gonna have to move on eventually, but it’s still just lovely to be here for a bit.