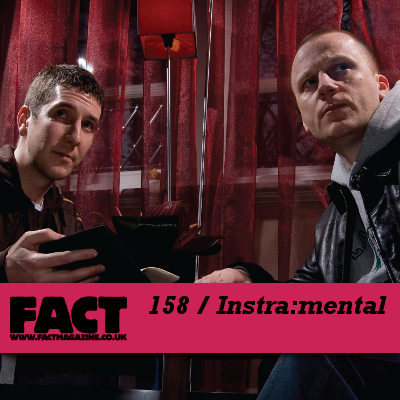 We first invited Instra:mental to record a FACT mix for us absolutely ages ago, but what with their regular Autonomic podcasts and recent FabricLive CD to worry about, not to mention their escalating duties as DJs, producers and label-owners, it’s taken until now for that mix to materialise. It was well worth the wait.

A duo comprising Alex Green and Damon Kirkham, Instra:mental have been releasing music under that guise since 2000. Over the past decade they’ve become known principally for a kind of dubstep-influenced drum ‘n bass minimalism, but that’s really just one facet of their sound – electro-flavoured vocal tracks like ‘Leave It All Behind’ and the masterful ‘Watching You’ owe as much to Drexciya and Kraftwerk as anything from the UK soundsystem tradition, while ‘Tramma’ and ‘Forbidden’ are among the best techno-not-techno tracks of the 21st century.

Tastemakers to the core, Kirkham and Green are also responsible for the carefully curated Nonplus label, providing a platform for releases from the likes of Actress, Skream and ASC. The latter’s Nothing Is Certain, due out later in summer, will be the first album from the label. Then there are those Autonomic podcasts. Conceived and executed with their friend and frequent collaborator dBridge, the Autonomic sessions present bleeding edge d’n’b steppers alongside tracks culled from the wider reaches and deeper recesses of the trio’s record collection – Two Lone Swordsmen, Julien Neto, This Mortal Coil, Prince, Cam’ron. Omar-S, Chapterhouse, you name it. Entertaining, educational and allowing us all to sip from the crucible of influences that makes Instra:mental such a unique production proposition –  the immense popularity of the Autonomic mixes is hardly surprising.

The duo’s FACT mix is centered around their own productions and music from other Nonplus and related artists. Look out particularly for ‘Forbidden’, the aforementioned track from their Apple Pips 12″ of 2009, and for ‘Rift Zone’ and ‘Doink!’, both forthcoming on Loefah’s Swamp81 imprint. Skream’s hugely underrated ‘Minimalistix’ is another stand-out; he also contributes the as-yet-unreleased ‘Rollin’ Kicks’. Addison Groove, LOL, Photocell (remixed by Dexter), Kito and Riya all weigh in with heavy productions.

Instra:mental will be playing at So Not Barcelona, a spirited riposte to the Sonar festival, taking place at London’s Big Chill Bar on June 17-19. They’ll be joined by Addison Groove, Luke Vibert, Raf Daddy and more – read our full preview of the weekend here.