Due out on June 29, Hideous Racket is the debut EP from London’s Allez-Allez. The 12″ is led by burbling acid chugger ‘Seven Down Six Across’, and also includes Fripp-referencing ‘Weird Science’ as well as the excellent ‘Slump’, which Optimo’s JD Twitch was moved to describe as sounding like “Chris & Cosey riding a flying hoover over the city in Blade Runner“. Digital bonus tracks come in the form of remixes from Wesley Matsell (Border Community), Pink Skull and Thee Four Horsemen.

The first pressing of the record is limited to 550 copies; each 12″ is packaged with a red or blue vinyl clingy dot, allowing you to choose ‘yes’ or ‘no’ to the ‘hideous racket?’ quandary depending on your mood. 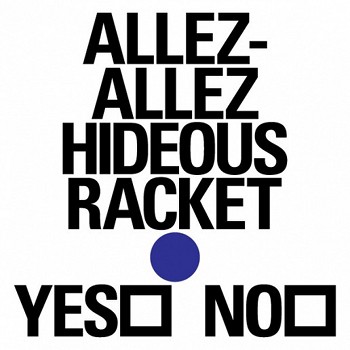 Secondly, check out the collaboration between RVNG Intl. and Metropolitan Indian: Historics‘ Infinidelity 12″ series.
The release was inspired by a short story of the same name by author Chris Leo, and comprises remixes of ten songs taken from Historics’ 2009 album Strategies for Apprehension. The artwork is by Mark McCoy and spans across three 12″s; the box set which houses them (pictured top) was designed by RVNG’s usual go-to-guy, Kevin O’Neill at Will Work For Good. The remixes comes from Tom Croose, SirBlly & Creso, Low Motion Disco, Pink Stallone, Jackpot, UFO!, Allez-Allez, CFCF, Leo Zero and Andrew Allsgood – each of whom was given Leo’s story and McCoy’s artwork as guidance.

The 12″s are available individually and also digitally, but the box sets are available only in a limited edition of 50 – housing all three records in 24″ x 34″ black & white poster prints and a custom wrapped box.

More information on both these releases here.