Shed will release his eagerly-awaited sophomore album, The Traveller, on August 30 through Ostgut-Ton.

It’s the follow-up to 2008’s Shedding The Past, one of the finest techno full-lengths of recent years. Since then, Shed has demonstrated an unerring ability to turn out distinctive, devastating club material with productions under the names STP, WAX and Equalized, the latter two finding expression through an ongoing sequence of “anonymous” white label releases. He’s also remixed the likes of Radio Slave, D-Bridge, Peverelist, Substance and Taho, using these as a playground for to test out his more experimental ideas, and contributed to our FACT mix series with a typically sterling session. There can be few people who don’t count Shed – real name Rene Pawlowitz – among the very best producers of the contemporary era.

According to a press release, the album takes inspiration from the sounds and attitude of dance music coming out of the UK in the early 90s (“Detroit, Chicago, Berlin: get in line, you’ve had your time”), frequently favouring breakbeats and abstracted, bruk patterns over a safe 4/4 pulse. Closing track ‘Leave Things’ in particular sounds indebted to the British rave sound, with its proto-jungle drums and tranced-out synths that recall both Aphex Twin’s ‘Polynomial-C’ and recent dubstep from the likes of Elemental and Synkro); Richard D. James is also brought to mind in the Drukqs-esque melodic tinkling of ’44A’. Other highlights come in the form of the low-slung ‘Keep Time’ and ‘Atmo – Action’ and ‘The Bot’, which is minimal, post-Rhythm & Sound dub in the vein of this year’s Panamax Project and ‘Dub Shed’ 12″s. ‘My R-Class’ is pounding but richly detailed warehouse techno that manages to scream ‘Berghain!’ without resorting to associated cliches, while ‘Final Experiment’ is a scuzzy, stripped-down companion piece to Shedding The Past‘s ‘Another Wedged Chicken’.

The Traveller will be released on double-vinyl, CD and digital via Kompakt distribution. That’s the cover art, below. 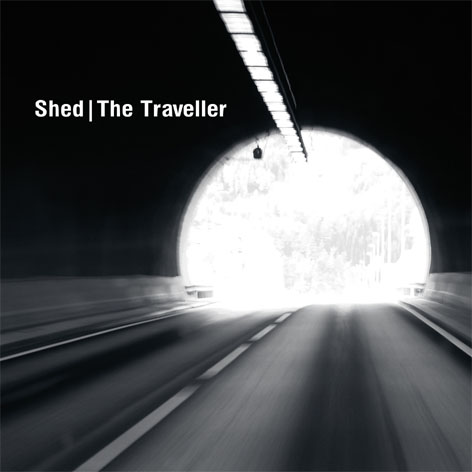