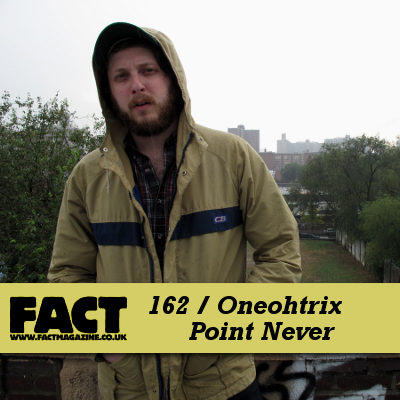 FACT mix 162 has been compiled for your pleasure by Oneohtrix Point Never.

Oneohtrix Point Never – the name is a play on that of Boston soft rock radio station Magic 106.7 – is the alter ego of Daniel Lopatin. He’s just released his new album, Returnal, to considerable acclaim – including a five-star review from FACT. It finds him going beyond the kind of widescreen, new age-daubed synthscapes with which he made his name, in search of something more organic and occluded. A roaring if rather oblique success, Returnal invitescomparison not just with the sonic sci-fi of Eduard Artemiev and Klaus Schulze (both an overarching influence on the whole OPN oeuvre) but also the grubbier, earthbound psychedelia of Coil, Jon Hassell and Skaters.

Lopatin has built quite a reputation since his debut 2007 cassette release, Betrayed In The Octagon. All his early releases – including the fantastic Transmat Memories and Russian Mind – were released in limited vinyl or cassette editions, meaning only the supernaturally quick and questing were able to bag themselves copies. Thankfully, towards the end of 2009 Carlos Giffoni and Lopatin compiled and remastered some of the best OPN tracks into a double-CD compilation entitled Rifts, released through Giffoni’s No Fun Productions imprint. That album, together with the latest, Returnal (available via Editions Mego) are essential listening tackle – proving that cosmic-minded synthesizer music can still be powerful and evocative in the 21st century, not just blandly retro and referential. Indeed, Oneohtrix Point Never unlocks the “dream-machine” potential of the analogue synthesizer with a vigour and a vision not seen, for our money, since the early days of techno.

“I try to use synthesizers to model topographies, or ideas, or ecologies, or situations, or bodies,” Lopatin he tells FACT in a recent in-depth interview. “Synthesizers equals paint.”

Oneohtrix Point Never’s FACT mix offers a fine insight into what makes this acclaimed artist tick, and showcases the skewed pop sensibility that permeates even his most abstract offerings. Beginning with the thugged-out, slugged-out hip-hop of The Half Dead Organization, we’re subsequently treated to the pastoral kosmische of Roedelius (‘Poetry, Pink Blue and Amber’), the echo-drenched folk of John Martyn (‘Go Easy’) and the throbbing minimal wave of Martin Dupont (‘Bent At The Window’). Those in amidst a load of cuts we didn’t even know existed until we heard the mix, but which can now be found at the top of our wantlists on eBay and Discogs.

Lopatin’s description of the mix is simple: “Slowed down 6%, bounced down to tape and loads of compression. Sounds like codeine. Just a bunch of jams I like at the moment.”