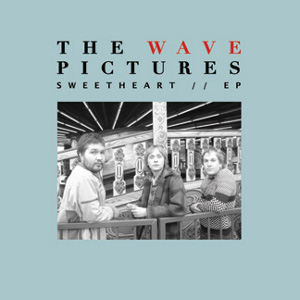 Wave Pictures are so sweet, so sweepingly romantic, so obviously brilliant. Like John Darnielle, David Tattersall has this wonderful knack for combining the sweet and the dark, the sentimental and the resentful. Like rotting fruit, Wave Pictures songs appear bright and ordinary but it soon becomes clear that something is wrong just beneath the surface.

The lyrics here are less complex than on previous albums. But they stick to the usual themes: relationships going wrong, and the small signs and symptoms which point to it. David Tattersall’s lyrics always feel slightly detached from the world, as if everything that happens is an omen of something profound and life-changing to come. Even descriptions of beautiful events sound ominous as David sings in this beautiful, tragic voice. The overarching impression you get from David is that he’s aware how perfect things could be, but is heartbroken that they’re just not quite there.

Sometimes the lyrics drift into surrealist descriptions – “there were steam trains and seagulls in my lungs”, “I will rustle your lashes loose” – which make the brutal realist lyrics that come later all the more striking, like when David says “I put my money down and went home with your sister.” Promiscuity is a constant theme. In ‘I Shall Be a Ditchdigger’ David is “fondling the breasts of the wife of the guy with the knife against your neck”, then as we’ve said he takes your sister home. In ‘American Boom’, he’s in bed with someone’s wife as a hurricane approaches, blissfully apathetic. The total rejection of monogamy in all the songs and the confused, obscurantist lyrics give us this knot of complexities and webs of messy relationships where nothing is grounded or certain.

There’s an American folk flavour across the entire EP, sometimes drifting into skiffle-like territory. Again like the Mountain Goats, the use of traditional music with unconventional lyrics raises eyebrows. Another weird thing about Wave Pictures is that David is perhaps one of three guitarists whose solos I not only put up with, but actually enjoy and look forward to (the other two are Johnny Thunders and Dimebag). The 150-second solo on ‘Cinnamon Baby’ bafflingly entertains, as it spins its warped way all over the song, getting more and more subversive and troubling as it goes on, and on. The solos come in disrupt everything which the band tried to contain in the verses. Which is what solos should do, and Wave Pictures are one of few bands who use them to genuinely express something.

Album closer ‘American Boom’ is the best song on the EP. The chorus features David repeating ‘I’ll be in my room’ in the best example of his tragic/celebratory dichotomous voice. It at once sounds comfortable and content – I’ll be somewhere safe and familiar – and  also resigned and miserable – I’ll be there again.