Paul White: …and the Purple Brain 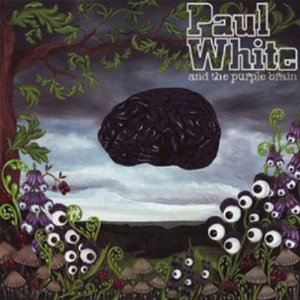 Available on: One Handed Music LP

British producer Paul White’s follow up to The Strange Dreams of… continues the sample obsession of his much lauded debut, with a particular focus on the works of Sweden’s answer to The Bevis Frond, cult guitarist S. T. Mikael. One glance at the album imagery – a levitating purple brain in a mushroom-packed landscape – tells you all you need to know: this is “trip-hop” in the truest sense.

This 25-track, 37-and-a-half minute travelogue through different moods and landscapes kicks off with a self-explanatory ‘Crazy Science Intro’, all mad laughs, screams and burbling synths, before gently segueing into ‘Gentle Freak’, a loose-limbed hippified hip-hop jam, where flutes, folksy-funky guitars and airy keyboards put bell bottoms on the bottom end.

‘Pride’ is one of a number of tracks to feature samples of S.T. Mikael’s sitar playing, White creating a cool, layered groove that feels like an intriguing hybrid of Madlib and Ananda Shankar. On ‘Fire Soul’, the sitar accompanies what sounds like a slowed down UK Funky beat, while a spoken male voice (presumably Mikael) promises “freedom, unity, crazy ideas…free expression”.

It’s a noble promise and one White tries hard to fulfill. Certainly there are many fine moments on this album: ‘Ancient Treasure’ with its delicious psych-groove, the reinvention of yearning 60s poppet-pop on ‘Come Back’, the ethereal, dubby Afrobeat of ‘Body Spirals, Part II’, to name but three. Yet, all the same I can’t help feeling there is a certain “crate digger-ness” to proceedings that stops this adventure from becoming truly adventurous. Not so much 2kool4Skool, more that in attempting to show the breadth of his musical knowledge and beatmaking skills, White foregoes a little depth. A patchwork album then, rather than the (in)coherent journey of earlier club-based reinventions of psychedelia, such as KLF’s Chill Out or Ultramarine’s Every Man and Woman is a Star. Nonetheless, an album that deserves to find a home in disparate record crates: from fans of Finders Keepers and Pete Fowler’s Monsterism Island series to J Dilla and FlyLo aficionados.