Hypno: ‘Over the Top’ 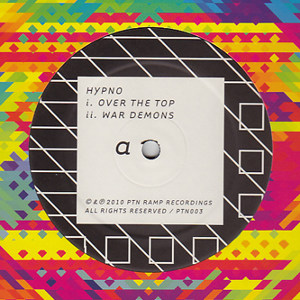 When talking to FACT recently, Tom Kerridge admitted that his sprawling Ramp Recordings label had developed into the complete opposite of the sort of labels he used to love – cliquey, cohesive collectives of artists bound by clear aesthetics.

Which goes some way to explaining why he’s approached his new record label, PTN, in such a focused way. Icelandic producer Hypno’s Over the Top EP is the third release on the imprint, and like its first and second (by Doc Daneeka and Hackman respectively; 004 is Ben ‘Breach’ Westbeech’s blinding ‘Fatherless’), it features colourful, slightly frazzled house tracks that fit nicely into the current post-Funky spectrum of UK club music.

Whereas past PTN releases were obviously influenced by grime and garage, with female vocals and prominent basslines, ‘Over the Top’ is sparser, with bubbling percussion and flickering samples creating an almost Horsepower-esque dynamic. The mid-day beach house of ‘War Demons’ is a bit forgettable, but Julio Bashmore picks up the pace on his remix, adding some twinkling synths and shaking up the track’s rhythm to make it a little less predictable. The EP closes on the slow, shuffling ‘Doo Doo’, which like ‘War Demons’ is lacking for me – all the individual sounds are on point, but there’s a certain playful thrill to the title track and Bashmore remix that you don’t get from the rest of the EP.

So overall, it’s the deepest house record that PTN have put out, and maybe the least successful as a result – compared to the fizzing, technicolour brilliance of tracks like ‘Deadly Rhythm’ and ‘More than Ever’, it’s a little bit flat – but it’s not without its moments, and given the fact that Hypno’s still in his teens, I’m sure it’s not the last we’ll hear from him.