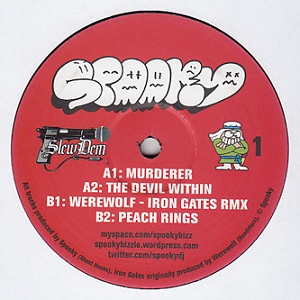 According to Discogs, DJ Spooky (not that DJ Spooky) hasn’t released a record since 2005’s reggae-flecked grime classic ‘Joyride’. Which is crazy if true, he’s been a member of grime’s Slew Dem Crew and a regular London pirate radio DJ for the best part of a decade, and his productions have been on point for about half of that time. Put it this way, if he made dubstep he’d have probably put out ten releases by now – God knows he’s got the tunes, there’s just hardly a multitude of labels queuing up to put out music by a grime kid.

Big up Simon ‘Oil Gang’ Hiscocks then, who here launches his label with a four-track EP of recent Spooky productions, kicking off with a remix of Barrington Levy’s ‘Murderer’. Rob Smith put out a phenomenal bootleg of this track in 2008, and rather than try to compare with the depth and weight of an RSD production, Spooky beefs up the original’s hook with metallic, clanging hi-hats and car crash samples. It’s simple, but it works.

‘The Devil Within’ is one of those grime tracks in the vein of Swerve’s ‘Streetfighter Riddim’, one of the most popular grime instrumentals of the year so far, that’s this close to being cheap wobble dubstep, but has just enough to it to keep it the right side of interesting. I don’t mind these tracks, but the best grime is unique and alien, and I don’t think they ever achieve that combination with the same success as say, Dizzee’s original ‘Streetfighter Riddim’. Far better are the last two tracks on Murderer, Spooky’s remix of Werewolf’s ‘Iron Gates’ and ‘Peach Rings’, which combine the rushing intensity of early grime with the haunted 8-bit of Royal T.