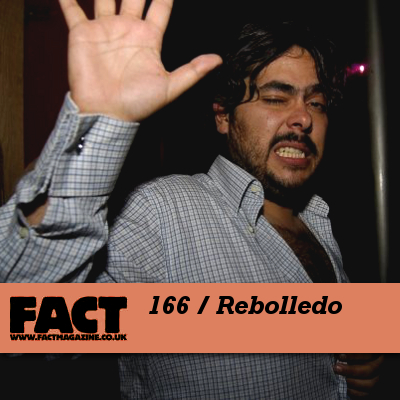 Anyone who has been following the exploits of Matias Aguayo’s Cómeme label, or attended one of his infamous Bumbumbox parties, will be familiar with the name Rebolledo.

The Mexican artist – whose sound is a pungent hybrid of house, techno, electro and avant-pop, suffused with Latin flavour – has earned a sizeable cult following for his singles ‘Bo Jack’ and ‘Guerrero’, and remixes for Aguayo, Zombie Nation and Von Spar have helped to raise his profile. Most recently Rebolledo has been collaborating with Superpitcher as Pachanga Boys and with ‘Pitch and Jörg Burger under the name The Three Lions – you can check out the first fruits of these two projects, the tracks ‘Power’ and ‘You’ll Win Again’, on Kompakt’s forthcoming Total 11 compilation.

You’ll be hearing a lot more from Rebolledo in the months ahead: he’s currently writing and recording his debut solo album, all but guaranteed to one of the best albums of 2011 (you heard it here first).  In the meantime, be sure to catch one of his flipped-out live/DJ performances – the more travel-hungry among you will find him playing FACT’s boat party as part of the Stop Making Sense festival in Croatia, September 3-5.

Rebolledo’s FACT mix is a charming, chicaning thing, anchored in house and disco but bucking convention at every turn; it features no less than seven of his own productions. See over the page for a Q&A with our man, in which he tells us more about what he’s got lined up for 2010 and beyond…

Summer’s here. What’s on the agenda?

“The main thing is that Gary Pimiento (who created Bumbumbox and Cómeme with Matias), is coming over to spend a month with me…In this time I’m gonna be working on the first ideas for my album which I want to have ready in about a year from now. Even though Gary is not a musician, producer or DJ, having him close by during any creative process is always great and revitalizing. Also, when we spend time together great ideas always come for new projects or for Cómeme.”

So tell us about your latest projects…

“In the last months I’ve been doing some remixes for different people, this is something I really like to do. It´s a shame sometimes the people that ask for them are expecting something like ‘Guerrero’, or ‘Pitaya Frenesí’, just with their lyrics on top. Or on the other hand, if there’s not a super-explicit similarity to the original, they don’t like it either (I say this after three of the remixes I’ve done have been rejected and not released…yeah).

“Also, I’ve been doing some collaborations lately…I’m very glad I’ve found some people with which I have so much fun working with, and that when it comes to the final result, it doesn’t sound like just me, or the other person, but actually both of us. The new Cómeme record is from me and Daniel Maloso together; it’s a 5-track EP called Desierto that reflects my ideas of dark dancefloor momentum and Dany’s musicality.

“I’ve been working with Superpitcher on new tracks for Pachanga Boys, the little project we have together. One of these tracks, ‘Power’, is included in the new Kompakt Total 11 compilation coming out in August. Also for the same compilation, Superpitcher and Jörg Burger invited me to join them to work on a track called ‘You’ll Win Again’, for which I did some singing. The idea is to continue doing things together every time a cool idea comes up that would fit our taste under the name The Three Lions.”

What current artists are you drawing inspiration from?

“Mmmm… Hard to say, because most of my inspiration doesn’t come from other music…but I like what the guys from Cologne Tape are doing, for example…Also, I’m going a lot through my old record collection, with a special focus on stuff from the end of the 60s and beginning of the 70s,  and there’s a little obsession with the Jacksons in their Motown years.”

Let’s put it another way: what are the big tunes for you right now?

“One of them is actually a remix I did with Matias Aguayo for a guy from London which was not accepted…the label boss said it was too dark and people would leave the dancefloor. A track that I did with Patricio (a friend back in Mexico), called ‘Atanavajas’. Superpitcher’s ‘Rabbits in a Hurry’ (mainly the instrumental). Matias Aguayo´s ‘Niños’, Cologne Tape, ‘Render’. ‘Dense and Home Alone’ an edit of the Jackson 5´s  ‘Hum Along And Dance’).”

What can we expect from your show at Stop Making Sense?

Who are you most looking forward to seeing play at the festival?

“I’m very curious about Optimo, and Allez Allez…I’ve never seen either of them, but I think their taste fits mine very much…Also I´d like to see Toy Selectah (the other Mexican invited), it’s been a while since the last time I saw him, so I’m curious about what his show is like now. And Theo Parrish. I saw him for the first time in Montreal at the Mutek festival a couple of weeks ago and it was great – for me it was the best of the whole event, but sadly the show was too short, so I want some more of that… ”

Where will we find you at sunrise on Sunday morning?