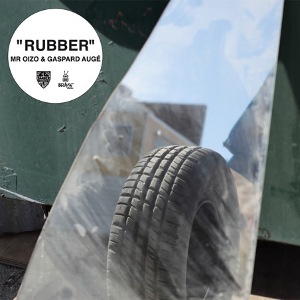 I don’t think I could trust someone who doesn’t like Mr. Oizo. Not liking Justice or Ed Banger or Uffie is probably just common sense at this point, but Oizo is a special case. A coked-up genius who fell in with a bad crowd. The Eric Cantona of filter-house. And here he proves how ace he is once again on an collaborative EP with Justice’s Gaspard Augé showing off music they recorded for Oizo’s recent film, Rubber.

Everything great about Oizo (and Justice when they’re on form, to be fair) is showcased here. The shamelessness: just fourteen seconds into opener ‘Rubber’, you’re thrown down a hill of cross-firing lasers, squealing handbrake turns and drums that don’t just roll, they seem to ripple and corrode into each other on fast-forward. Oh, and hand claps. The beauty: the same track closes on a sample of some disco beaut that I’ve never heard of before being quickly filtered out. The ridiculous size of it all: the kicks on ‘Tricycle Express’ stomp like a city coming to life, lit up by absurdly Kraftwerkian synths shining overhead, and ‘Polocaust’ is so dramatic with its strings and flute that it makes Kill Bill’s soundtrack seem subtle by comparison.

Flying Lotus rounds off the EP with a remix of ‘Rubber’, and he does a good job at trying to match Oizo’s combination of the bizarre and the beautiful, switching between Carnival of Souls rave and twinkling pajama pop, but you don’t out-villain the villain on his own 12″.