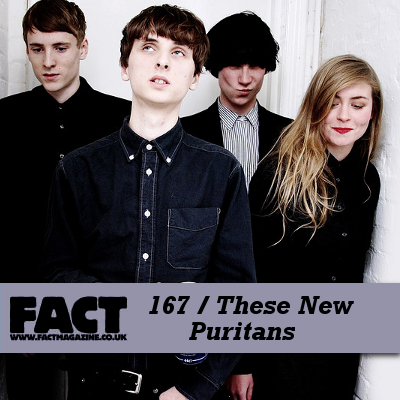 British art-rock and musical risk-taking used to go hand in hand. It’s a fact which the past decade and a half, governed as it has been by posturing and pastiche, could easily make you forget.

Southend-hailing These New Puritans remember. They’re that rare breed of young group: the kind which isn’t content to ape the the moves of a previous generation, the kind which wants to find its own mode of expression. Their debut album Beat Pyramid was, for us at least, a pretty unrewarding affair, the sound of a band struggling with the anxiety of influence; but their sophomore effort Hidden, released back in January of this year, was nothing short of a revelation.

Prior to the album’s release, TNP’s frontman Jack Barnett had grandiosely described the new material as “dancehall meets Steve Reich”. He wasn’t kidding. The thickly layered, martial drum and clap tattoos that characterise Hidden do indeed nod to the toughest Jamaican ragga, while the arrangements and subtle harmonics are clearly indebted to the minimalism not just of Reich but also Glass, Nyman and Adams. The instrumentation is off-kilter, with guitars and obvious synthesizer lines eschewed in favour of (wait for it) “six-foot Japanese Taiko drums, a 13-piece brass and woodwind ensemble, sub-heavy beats, prepared piano, a children’s choir, and Foley recording techniques (including a melon with cream crackers attached struck by a hammer, used to simulate the sound of a human head being smashed)”, not to mention the voice of Salem’s Heather Marlatt supplementing Barnett’s own.

It’s an album suffused with melancholy (opener ‘Time Xone’ and closer ‘5’, with their displaced colliery blues flavour, are particularly powerful) but also a great deal of anger: tracks like ‘We Want War’, ‘Firepower’ and ‘Attack Music’ are as furious as their titles suggest. It’s a romantic kind of fury, of course, and the fact that Barnett’s songs and lyrics draw directly on the work of John Rutter, Edward Elgar, Richard Rodney Bennett and Richard Garnett leave one in no doubt as to TPN’s desire to situate themselves in the Albion’s visionary tradition.

Pretentious? Undoubtedly. And make no mistake, Hidden – produced by Barnett and Graham Sutton, formerly of influential post-rock outfit Bark Psychosis – is not without its flaws. But in a climate where most bands think that simply splashing a bit of synth over their half-baked indie-pop songs ranks as a cutting edge gesture, These New Puritans’ ambition and willingness to push themselves ought to be saluted, not ridiculed.

The band’s FACT mix is as unashamedly high-minded as their own work, centered as it is around the work of idiosyncratic composers Britten, Stockhausen and Shostakovich. There’s room also for eerie Twin Peaks chanteuse Julee Cruise, squashed dream(nightmare?)-pop from Salem and analogue electro from DMX Krew. Stately and ethereal throughout, we think you’ll agree that it’s one of the most unusual and edifying FACT mixes of 2010 so far.