UK hip-hop perennial Roots Manuva is set to make a slight return on September 6 with a new album for Big Dada, Duppy Writer.

It’s actually a collection of reworks by Wrong Tom. The Staines-based DJ/producer, who has worked with Pama International, Trojan and, er, Hard Fi, contacted Big Dada to ask if he could fashion a dub version of Roots Manuva’s single ‘Buff Nuff’. Impressed with what he turned out, Big Dada commissioned a series of mixes which became the bonus disc on the limited edition version of Roots’ Slime & Reason LP.

Duppy Writer is an expanded version of that bonus disc, and is being released with new artwork from the Tony McDermott (the legendary illustrator responsible for unforgettable comic-style sleeves for the likes of Scientist and Mad Professor). It covers not just tracks from Slime & Reason but all four of Roots Manuva’s main studio albums, as well as tracks from Dub Come Save Me and Alternately Deep. There’s also a brand new collaboration between Roots Manuva and Ricky Ranking, ‘Jah Warriors’, which will be released as single. 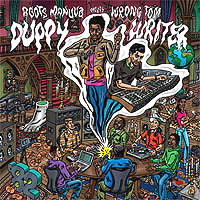