Deerhunter have revealed the cover art and tracklist for their new album, which they’ll be releasing through 4AD on September 28.

The album is called Halcyon Digest, and it’s the Atlanta indie ensemble’s fourth to date. In a spirited throwback to the, er, halcyon days of DIY culture, they’re asking fans to download a poster advertising the album (detail pictured above) from their website, print it out, and hang it “in your town, neighbourhood, bedrooms, etc”. Those who do so are encouraged to e-mail photos of their efforts to the band, on the promise that they’ll be among the first to hear the new Deerhunter single, together with a new non-album cut, in a couple of weeks. More info on this “interactive xerox art project” (as the label grandly terms it) here.

Frontman Bradford Cox says: “[I’ve always been] fascinated with the ephemera of 70s-80s artrock in record stores like Wuxtry in Athens where I hung out as a kid or Wax ‘N Facts in Atlanta. You’d see a photocopied faded B-52’s flyer next to a poster for Lou Reed or XTC. It was like an artpunk scrapbook on those walls. It made my head spin. Who are these people? Who are the fucking Residents with these weird-ass eyeball faces?”

Prospective participants in this old-school viral campaign are asked to “respect local laws regarding the posting of flyers, and to ask permission before posting them on private property”, which doesn’t seem very punk, but there you go.

The tracklist and cover art are as follows: 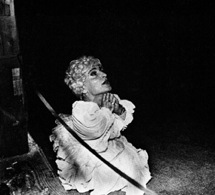