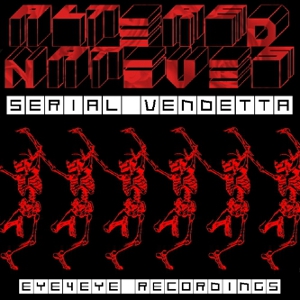 His name is Danny Native and he is a workaholic. A mere month after the superb Tenement Yard album, Altered Natives returns with another full-length. It’s not quite up to Wiley’s level of manic hard-drive purging, but still begs the question; do you need another 80 minutes of Altered Natives so soon after the last batch? Is this generosity, or overload?

It’s a problem that Serial Vendetta pretty much sidesteps by being so unlike Tenement Yard. It’s different not so much in sound, but in scope and feel. Tenement Yard was a relentlessly intense listen, rolling forward like a peak-time UK Funky DJ set rather than a ‘home-listening’ LP. In contrast, Serial Vendetta is definitely, self-consciously, an album. Snowdrifts of isolationist ambient drones are laced through it, along with slices of neurotic film dialogue. Freed from the immediate constraints of the dancefloor, Native plays with the dynamics of mood, as on the stalking technoid Funky of ‘Distances’, which suddenly drops away to whispering, beatless vertigo.

But Native has by no means abandoned the dancefloor. Especially when it lightens up and lets the sun in, Serial Vendetta can be as ferociously Funky as anything on Tenement Yard. ‘Immortality’, for example, might be the most innately danceable track that Danny Native has yet released; an organ vamp ducks and weaves through the beats’ teeth-grinding chatter and then locks into an ecstatic one-note crescendo, while the rest of the track speeds on by. It’s both great fun, and an awesome display of Native’s understanding of tension and release, as he pushes the groove into spaces both between and outside of the core rhythm.  More straightforward but similarly wonderful is ‘Skankysket Riddim’, which swings a carefree keyboard flourish over an interplay of handclaps and those trademark ‘Rass Out’ bass-thumps, a perfectly balanced and light-as-air mobile spinning in space.

Serial Vendetta journeys pretty far beyond the typical UK Funky landscape, to the point where it could sit happily in, say, Hyperdub’s roster. The schizophrenic ‘Claart’, for instance, swamps its wildpitch synths with some brilliantly darkside tolling bells, muffled into grainy clangs just to increase the evil. And ‘Mothership’ starts out akin to Flying Lotus, with the kind of loose metallic rattle that always makes me think of hot, vaguely Middle Eastern markets, and then sandblasts it with shards of distorted rave. Heady, next-level stuff.

Yet not all the experiments come off, particularly the squashed wig-out of ‘Cut Slash Mutilate’, which is a bit awkwardly noodly; as if someone like Rephlex’s Bogdan Raczynski were attempting an approximation of an Altered Natives track. On a few occasions Native ramps the intensity way up and goes for the jugular, but as hardcore as ‘Mother’ and ‘5 Deadly Venoms’ are, the funkiness is left sadly crumpled under the noise and blare. With these tracks there’s a sense that Native is furiously working away at the beats, trying to force them into a new, tougher, more overtly junglist child of Funky – but right now we’re getting the difficult birth-pangs.

At his current rate of work, Native’ll probably have ironed out these issues by next month. For now, though, Serial Vendetta mixes latent promise, a few blind alleys, and a fair few absolutely huge tunes. If you loved Tenement Yard, there’s plenty to love here. If not, then that almighty LP should still be the first, urgent stop.