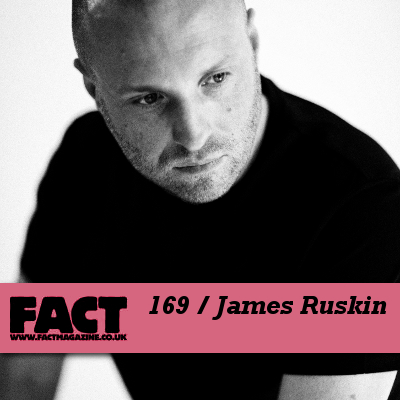 Our man grew up a hip-hop enthusiast, but it wasn’t long before the techno bug took a hold of him, prompting him to found the Blueprint label in 1996 with his friend Richard Polson. Acting as a platform for productions by Ruskin, Polson and fellow Londoner Oliver Ho, and inspired by the raw sound of Underground Resistance and early Downwards, Blueprint quickly established itself as one of the preeminent British techno labels. Surgeon was one of the first DJs to respond to Blueprint’s offerings, recognising a kinship in terms of attitude as well as sonics; inevitably, despite its base in London, Blueprint became bound up with the tough, industrial “Birmingham sound” espoused by Surgeon, Regis, Female et al.

As that sound grew in popularity in international reach, Ruskin – a consummate DJ as well as producer –  began a relationship with Berlin club Tresor, regularly playing at the club and recording three highly accomplished albums for its in-house label. The last of these, 2008’s The Dash, was something of an elegy for Blueprint co-founder Richard Polson, who tragically died in 2006. Austere yet remarkably emotive, this album heralded a new wave of artists and releases inspired by the greyscale aesthetic of 90s UK techno and the intense martial funk of Robert Hood and Jeff Mills – indeed, the flowering of Ostgut Ton, Sandwell District and all their ilk was just around the corner.

Fittingly enough, Ruskin recently made his debut on Ostgut Ton, his track ‘Graphic’ appearing on Ben Klock’s Berghain 04 CD and spin-off 12″. Blueprint, meanwhile, is in rude health. After a hiatus spanning most of 2007-2008, Ruskin fired up the engines again last year, putting out a quick succession of 12″s by himself and Valmay. This year has already seen the release of Ruskin and Mark Broom’s No Time Soon EP, and a new 12″ from O/V/R – Ruskin’s fledgling production partnership with Karl O’Connor AKA Regis – is imminent. Robert Hood will also soon make his Blueprint debut with a remix later this year.

And so we come to the James Ruskin FACT mix. Powering through a whopping 42 tracks in a lean one and three quarter hours, it’s a real techno masterclass, rhythmically diverse, taking in tracks from Ruskin himself as well as contemporary like minds such as Marcel Dettmann, DVS1, Mark Broom, Ben Klock, Traversable Wormhole, Mike Dehnert, Mark Broom and Peter Van Hoesen. There’s a wealth of new and as yet unreleased material featuews, including Ruskin’s remix of Planetary Assault Systems’ ‘GT’ and a new O/V/R, plus sure shots from Detroit dons Jeff Mills,  Rob Hood, Kenny Larkin and Dopplereffekt, upfront steppers from Scuba and Al Tourettes, and classics from Aphex Twin, Balil and Underground Resistance. In a word: barnstorming. If, come the one-hour mark, you’re not punching the air or at least biting your lip in appreciation, then you can have all your money back.