Best Coast: Crazy For You 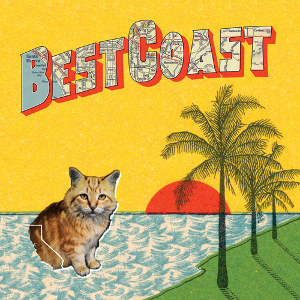 You know those people that say that winter is their favourite season?  All that “tucked up with a nice cup of tea, watching the snow outside on a crisp winter morning yadda yadda yadda”? Fuck those people. OK, apologies, that’s too strong. But I still don’t trust them. Not realising that summer is basically the whole point of the rest of the year is, in my book, up there with not liking Toots and the Maytals or Nando’s; symptomatic that something has gone horribly wrong in a person’s soul.

So when a record is announced in a fanfare of summery adjectives (“sun-drenched” seems to be a particular favourite), and which is pretty much all about endless Californian teenage summers, I can’t help but get a little excited. But then…oh, this is disappointing. I know one shouldn’t believe the hype but still; a lot of Crazy For You sounds like the kind of band you’d stumble across at three in the afternoon at Reading Festival 1999 and think, “yeah, quite nice”, before wandering off to watch people throw piss at Kevin Rowland, never to think of them again.

You will have heard Best Coast’s schtick a thousand times before – the Ronettes drum-beat, the West Coast punk-pop harmonies, the fuzzed garage guitars. The band Slumber Party and Leeds’ mighty 555 records (with the likes of the wonderful Aislers Set) took this sound close to the sublime in the early 2000s. Crazy For You is far from being a bad record, and tracks such as ‘Boyfriend’ and ‘Each and Everyday’ are expertly crafted – everything just fits and glides together. It’s just that if you’re after a bit of Spector-influenced indie jangling, I can’t see any reason to choose this particular record over countless other similar, but better ones.

Much has been made of Bethany Cosentini’s lyrics, and they are indeed pretty brilliant, especially “I lost my job, I miss my mom, I wish my cat could talk”. But while that directness is so appealing in the lyrics, the no-frills straightforwardness of the music itself ultimately hampers the record. There’s little mystery to this music, no hidden depths to carry you under. You know from the first bar of these songs how they’re going to be and to end. For all the yearning melancholy and emotional complications of Bethany’s words, the songs are almost unremittingly bright and clear, to the point of being one-dimensional.  Only the aptly named ‘Summer Mood’, with its multi-tracked smears of vocals intertwining round each other, evokes the true, intoxicating strangeness and haziness of the season itself.