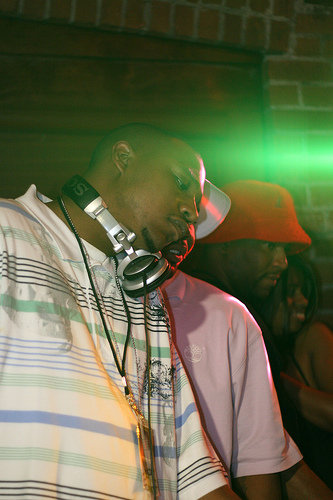 Remember we were telling you about Planet Mu’s mission to give Chicago’s juke a worldwide physical platform, starting with DJ Nate’s EP and album for the label?

Well the electronic veterans have now announced full details of DJ Rashad and DJ Roc’s releases for the imprint. First off, Rashad, a veteran of the Chicago dance scene whose links to Paul Johnson and DJ Godfather go back years (you might remember that us and Night Slugs tried to book him for our Cable party this year, but immigration weren’t as keen on the idea), will release a six-track EP this October titled Itz Not Rite.

Rashad, along with his partner DJ Spinn, made his name on a series of releases for Juke Trax and Databass, many of which are available for download on Juno and Boomkat. He also represents the snappier, more club-focused side of juke, compared to DJ Nate’s pitch-bent cuts for the weirder side of the dancefloor. Itz Not Rite drops early October.

Later in October, DJ Roc will release his album for Mu, The Crack Capone. Roc has been producing juke for the best part of a decade, and formed the Bosses of the Circle crew who put on some of the city’s more successful juke parties. They were also, according to Mu, the first juke squad to put out their own mixtapes, the Juke City series.

Itz Not Rite will be released on October 4, The Crack Capone October 20.

The Crack Capone Tracklist:
A:
ONE BLOOD
LET’S GET IT STARTED
THEY CAN’T FUCK WIT ME
PHANTOM CALL
KING OF THE CIRCLE
B:
I MAKE HER SAY
I CAN’T CONTROL THE FEELING
FUCK DAT
MAKE CRACK LIKE DIS
TAKE HIS ASS OUT
C:
DJ ROC SYMPHONY
LOST WITHOUT U
GIRL WEN U DANCE
BALL EM UP
I DON’T LIKE THE LOOK OF IT
D:
GET BUCK JONES
GUN SMOKE
KILL DA BITCH
SHOT DOWN
BREAK IT DOWN