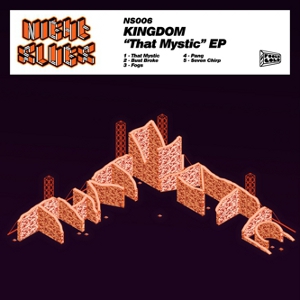 Pitchfork once described Kingdom as “not doing subtle”, which is unfair. A better way to describe Kingdom, despite the clear influence of the UK’s grime and bassline house scenes on his sound, would be to say that he’s very American. He doesn’t do things by halves. Or at least, he didn’t. On That Mystic, his new EP for Night Slugs, he takes the heavily twisted club sounds and wide-reaching influences that made tracks like his anthem ‘Mindreader’ so distinctive, and hones them into otherworldly rave music filled with subtlety.

That Mystic is full of little touches of brilliance that take you by surprise. The way the first drop on the EP, on opener ‘That Mystic’, features a more muffled take on Kingdom’s “kingdom… kingdom” signature to indicate the track’s subterranean course. Those springing synths on ‘Fogs’, lurking just behind the vocals. It’s easy to focus on the dramatic breakdown on ‘Bust Broke’, but what about the way it catches you off guard when the drums drop back in? The chopped-up vocals Kingdom loves to use are frequently present here, but mean more when they only emerge from the shadows at certain parts of the tracks, giving them a ghostly quality for the rest of it. The attention to detail is something else at points.

And then, at the end of That Mystic, you get its secret weapon, the hushed ‘Seven Chirp’. If you ever used to jam to Mya and Silkk the Shocker’s ‘Somebody Like Me’ then get ready to feel like a teenager again, because it’ll knock you dead where you stand.