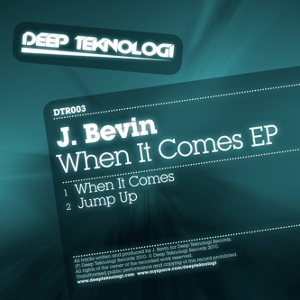 J. Bevin’s ‘When it Comes’ is the second release to emerge from Deep Teknologi’s label this year and it looks like the fledgling imprint have no intention of letting the quality dip. Following in the bovver booted steps of Zander Hardy’s ace Hard EP, new boy in class Bevin’s debut single shows that while his face may be fresh, his sound has the sort of toughness to make any rave veteran proud. And if his music’s anything to go by, then he’ll be flushing older boys’ heads down the toilet in no time.

Whereas earlier tunes on the imprint have taken their cues from more traditional house-based business, ‘When it Comes’ is a monstrous slice of mutant UK funky, beefed up on protein shakes and dressed in sonic steel. Built around a suitably bragging sample (“When it comes, I won’t even notice… I’ll be too busy looking good”), it veers away from the tropical flavour of many of its peers, opting instead to use its beat like a sledgehammer straight to the jugular. The bassline has all the airs and graces of a foghorn, but it’s kept in line by the strict toms and high-pressure synths. As big rollers go, it’s particularly gnarly and demands to be played loud.

‘Jump Up’s title betrays its high levels of energy and attitude. Another fizzer, this is again UK funky in design but coated in armour, ready for war. Both tracks are built for the main room of Fabric late on a Friday night, and illustrate just how right Deep Teknologi get the balance between big room house and the UK’s mutant flavours. Don’t let them out of your sight.