Soul Jazz have pressed up a new edition of their classic 2005 compilation, Tropicália: A Brazilian Revolution In Sound.

Boasting a 48-page book of accompanying text, photographs and interviews, the 2010 edition is available on CD and limited double-vinyl. Collecting tracks by the likes of Os Mutantes (pictured), Tom Ze and Gilberto Gil, Tropicália was instrumental in reviving international interest in the sound of late 60s Brazilian psychedelia. Here’s what the label had to say about it:

“Tropicália is one of the most significant cultural movements in Brazil encompassing music, film, visual art and theatre. Tropicalia is the first album to bring together all the key artists involved in the movement – Os Mutantes, Gilberto Gil, Caetano Veloso, Tom Zé, Gal Costa and more.

“The Tropicália movement was born in 1968, a momentous year around the world. It was the year of the Martin Luther King and Bobby Kennedy assassinations, the Prague Spring, the Chicago Convention, the Tet Offensive in Vietnam and the anti-war movement, the student rebellion in France, civil rights, the beginning of the end for the Soviet Union and the birth of the women’s movement. In Brazil, army violence that killed three protesters in the opening months of 1968 failed to keep students from protesting the four-year-old repressive Brazilian military dictatorship. It was against this extraordinary backdrop that Tropicália arrived. As a coherent movement allied to worldwide political and cultural unrest, Tropicália lasted little more than a year, yet it had – and continues to have – a profound effect on Brazilian society.

“Tropicália artists loved the Beatles and Jimi Hendrix. They loved such forgotten Brazilian musical radio heroes as Dorival Caymmi, Luis Gonzaga and Orlando Silva as much as they were interested in the avant-garde of John Cage and Stockhausen. The Tropicália artists loved Joao Gilberto even though the rise of Tropicália in many ways resulted in the demise of Bossa Nova, the elegant Brazilian music that had swept to international prominence at the start of the Sixties.”

For more information on the compilation, and to listen to sound-clips, click here. 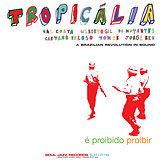