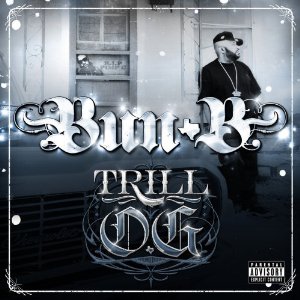 Trill O.G., the third solo album by legendary Southern rapper and one half of UGK, Bun B, just got a five mic rating in The Source. That used to be the biggest accolade a hip-hop album could get, though the noughties saw the relevance and legitimacy of the magazine drastically slide, and it’s nowhere near the yardstick it once was. Still, for some perspective, prior to Bun only four albums have received the rating in the last eleven years, so it’s still a big talking point.

Hearing that, you might head into Trill O.G. expecting fire, immediacy and brimstone, but what’s really remarkable about this album is its consistency and measured professionalism. Potential minefields pop up, like the T-Pain featuring single ‘Trillionare’, which could so easily slip into coked-up Flo-Rida chart electro, but gets saved by producers J.U.S.T.I.C.E. League’s stuttering 808s and Bun B slowly, studiously wading his way through the verses. ‘Right Now’ features modern R’n’B heatmaker Trey Songz alongside posthumous verses from 2Pac and Bun B’s deceased partner in UGK, Pimp C in the sort of track that again, could have been tacky but isn’t.

Many of the greatest hip-hop albums (think The Blueprint, Illmatic) are aided by their lack of guest appearances, so it’s impressive that Bun manages to rope in a close-to-ensemble cast of rappers and producers and still emerge with not only a consistent record, but one that he comes away from as by far its dominant voice. Current BET golden boy Drake appears twice and does good, on ‘Put it Down’ and closer ‘It’s Been a Pleasure’, but has the misfortune of coming up against two of Bun’s best performances on the album, particularly on the latter where he not only describes being drunk better than anyone else could (“up in the club, getting white boy wasted / one shot of Patron, then another one to chase it”) but drops teary-eyed lines about time spent on road, court cases and his kid (“and your heart skips a beat every time they smile”).

The best guest verses come from Yo Gotti and Gucci Mane on ‘Countin’ Money’. Placed roughly at the centre of Trill O.G., it’s probably both the hardest and best track on the album, with another raw, 808-heavy production from DJ B-Do and Gucci going on about how his “neck look like the Mardi Gras”. Well no shit. Elsewhere, Twista comes hard on the lens-flared ‘Speak Easy’, and DJ Premier appears behind the boards for ‘Let ‘Em Know’, Bun opening every line with “Bun B’s on the mic / Premier’s on the track” in a simple but welcome throwback to the old style of rhyming.

Trill O.G’s not all great: ‘Lights, Camera, Action’ is a pretty boring track about how much Bun likes performing live, though it’s more touching than it is self-congratulatory, and we’ve already established that ‘Trillionaire’ is a little dodgy. There’s not a song on the album as good as the best tracks from recent long-players by The-Dream, Big Boi or Drake. But weighing in at 16 tracks, three of which are intros or skits, the quality dips less than on those records, and despite the variety of producers on board, the music is bound together by a love of snapping snares, creeping melodies and 808 drumlines. So is Trill O.G. a five mic album?

Well, probably not, but then the only album since the ‘90s to receive the accolade and deserve it was Jay-Z’s The Blueprint. Like Scarface’s The Fix before it, Trill O.G. is a sentimental five mic choice to reward a weathered, and more importantly, consensually admired veteran from a part of America that traditionally never got enough love. But it shouldn’t mask the fact that it’s also a remarkably consistent hip-hop long player that despite not featuring any truly classic cuts, does find Bun B sounding frequently authoritative, often poignant and occasionally superlative.