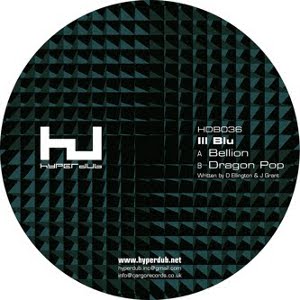 First of all, the appearance of two Ill Blu productions on vinyl deserves some approval. The production duo are far from a footnote when it comes to talking about UK funky, but this is their first physical release in their own name, following work for Princess Nyah and Shystie. Although funky is hardly the first genre to evade tangible documentation, it lives a flickering sort of existence especially in keeping with prevailing modes of consumption. While it barely makes sense to resist this, traditional releases do offer a welcome, if slender, backbone amid the flow of Youtube hits and elusively distributed files.

In archiving material from the likes of Ill Blu, it’s fair that Hyperdub should discriminate consistently with an aesthetic broadly marked out by the label. Naturally though, this presents a limited perspective. In illustration, one of funky’s best attractions arguably lies in its capacity to bring on the kind of benign rush generally missing from grime, dubstep and the less commercialised end of house music. Ill Blu’s own sugary remix of Cheryl Cole’s ‘Parachute’ is a good example of this; then there are DJs such as Petchy, who teamed up with his trio of boisterous MCs can climb somewhere close to the heights scaled by cheerfully nutty hardcore around a decade ago.

Neither ‘Bellion’ nor ‘Dragon Pop’ does much of the sort by itself – although in fairness, it is possible to imagine the latter successfully filling something of a plateau in a Petchy set, say. Rather than a rush, bouncing dancers along fit-to-burst surface tension, the category of effect might better be described as a trip, pulling inwards like sinking sand. ‘Bellion’ thus resembles a peak-time Crazy Cousinz production inverted: bereft of the shrill, centrifugal energy of a vocal track, naked-sounding glockenspiel accents tumble to the foreground. The result is solid, but feels just slightly flat. ‘Dragon Pop’, despite the colourful title, is more consistently monochromatic. Built entirely of percussion, it’s nonetheless the more fascinating of the two, a writhing conga-line of shakers stacked on hand drums, snares and soft blows of bass.

The hollowness of both tracks isn’t without its desirability, but at the same time it seems to signify a lack of desire. It emphasises that the concept of dance music as hypnotic understatement is almost overly familiar. That’s not to suggest it’s wrong as such to explore this path, but it’s questionable whether the destination holds the most exciting potential within funky’s grasp. Hyperdub’s backing of Ill Blu (along with Cooly G and Scratcha DVA) can only be a good thing, but it raises the issue of whether it’s fully complemented from all corners. It might be good, too, if the label’s example were both followed and disregarded more often, in different ways. Otherwise, perhaps other sides of the music are due to be remembered in as ephemeral a fashion as some of grime’s most inventive phases.