No Fun Productions will release a split LP from Ducktails and Dracula Lewis on August 23.

Ducktails is the alter ego of Matthew Mondanile, a member of Real Estate. His various hazy, elegiac (and dare we say it, hypnaogic) recordings as Ducktails – particularly last year’s Landscapes LP on Olde English Spelling Bee – have met with much acclaim. The rather more mysterious Dracula Lewis makes expansive, pseudo-horror-flick music that oscillates between ethereal ambience and grinding, zombie-attack noise freakouts. There are definite, if difficult to articulate, similarities between Ducktails and Dracula Lewis’s compositions, but in terms of overall mood they couldn’t be more different – which makes for an interesting split.

The LP, comprised of all untitled tracks, is limited to 500 copies, and issued by No Fun Productions – the New York noise label, operated by Carlos Giffoni, that has brought us records from the likes of Oneohtrix Point Never, Russell Haswell and Hair Police in the past. Here’s what they have to say about Ducktails and Dracula’s effort:

“There is a murder in the beach. Ducktails arrives in his spaceship escalade to investigate the scene. Dracula Lewis is the principal suspect. They become best friends and decide to work on a split LP. When a vampire kills a body is never found. At the same time beautiful and terrifying cavern drone sounds from Dracula Lewis, Psychedelic spiralling melodies and electronics beats from Ducktails. Both investigate the limits of the space time continuum. This is the new dawn of expansive music. Ducktails is Matthew Mondanile. Dracula Lewis was born in Transylvania but currently lives in the country side of Italy, were the locals refer to him as ‘A Gypsy.'” 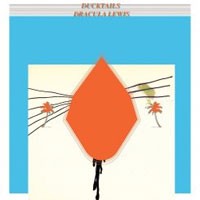