Skream: Outside the Box 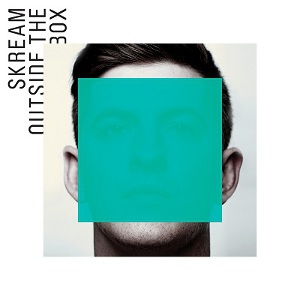 A friend of mine once described Skream as the Michael Caine of dubstep. Some of his work is brilliant, some is dross and probably made for a quick quid, but no matter how much the bad material starts to stack up, it’s hard to dislike or resent him. That was the case then, and for me it’s still the case now. It won’t surprise you that Outside the Box is inconsistent – Skream’s always been inconsistent, and some of it is even worse than that terrible Magnetic Man single that just came out. But equally, it won’t surprise you that some of it represents the London producer, who’s still only in his early twenties let’s not forget, at his best.

Skream’s early work, which paved the way for dubstep to become the worldwide phenomenon it is now, was inspired by those around him – particularly his older brother Hijak and friends at the Big Apple record shop, which included Benga and Hatcha. His current tastes though, if his Twitter is anything to go by, have started to lean towards indie fan electronic favourites like Trentemoller and Orchestra of Bubbles, and you see it all over Outside the Box – on the swelling, almost ambient opener ‘Perferated’, on new single, the breakbeat-heavy ‘Listenin’ to the Records on my Wall’ and on the album’s closer, ‘The Epic Last Song’. Each are so obviously done with the words “emotive” and “epic” in mind that they’re almost off-putting, but Skream pulls each of them off, providing three of the LP’s highlights.

Elsewhere things aren’t as rosy. ‘8 Bit Baby’ features rapper Murs, who once was one dodgy line away from a perfect hip-hop album (“met Rachel in the corner all emotional and mushy / put my dick on her tongue, glowstick in her pussy”, from the otherwise brilliant Murs 3:16 – The 9th Edition) at his boring worst, talking about how good him and Skream are in about a thousand different, equally dull ways. ‘CPU’ features a computerized voice saying “I am your computer” over a dubstep beat that never gets past second gear, and I have no idea how anyone thought its inclusion was a good idea. The Sam Frank featuring ‘Where You Should Be’ is an attempt at a cyber-pop ballad that’s nowhere as near as good as Skream’s past remix of Chromeo’s ‘Night by Night’, or indeed, anything from Jimmy Edgar’s new album.

Outside the Box picks up on its fifth track, the superb ‘How Real’. The emo-tronica vibes are in full effect here, and it’s not a million miles from how Dntel might sound if he made garage, but you know what? Dntel probably would’ve made ace garage. The chorus, with Skream cutting up and time-stretching the vocals, courtesy of Freckles, proves that he can tug your heartstrings without relying on over-the-top breakdowns, and it’s easily the most successful vocal on here. ‘Fields of Emotion’ follows, a slow half-stepper that slips between Silkie-esque passages of jazz-step and more interesting moments lit by gleaming synths.

‘I Love the Way’ starts off as a limp ballad before heading underground for some dimly-lit jungle that’s slightly more successful. We then get ‘Listenin’ to the Records on my Wall’, the album’s already discussed, cheap-but-effective centrepiece, and ‘Wibbler’, a tear-out dubstep track that’s not only really good, but really welcome after the eight tracks that preceded it. Like ‘Oskilatah’ from Skreamizm 4, it’s proof that when done well, mid-range driven wobblers can be disorientating and brilliant, Skream stretching the oscillations as close to breaking point as they’ll go, and twisting them around colossal, booming high-hats.

One of the problems with Outside the Box is that there’s a lot of tension built up, on tracks like ‘Metamorphosis’, ‘Fields of Emotion’ and the dBridge and Instra:mental featuring ‘Reflections’, and too often the album’s release points are subdued by strange decisions or ill-advised vocals. La Roux delivers the album’s last guest spot, and although it’s one of her better performances, it’s not that interesting a track. Traditionally Skream’s best music is alien, unlike anything that came before it, and in the same way that La Roux tones down the shrillness of her voice here, Skream’s backing is breakbeat-driven, chart-friendly house.

And maybe that’s the true problem at the crux of Outside the Box. Although its self-consciously epic stand-out tracks, ‘Listenin’ to the Records on my Wall’, ‘Song for Lenny’ and ‘Epic Last Song’ are genuinely effecting, it’s a shame that someone who pioneered a genre that was once so fresh has to turn to forms of music already done to death – namely hands-in-the-air house, trance and jungle – now that he’s conscious of his potential for chart success. Still, remove Outside the Box from its wider context and you’ve got an album with its fair share of quality; albeit one that sits closer to Sigur Ros and Moderat than it does its supposed peers in dubstep.