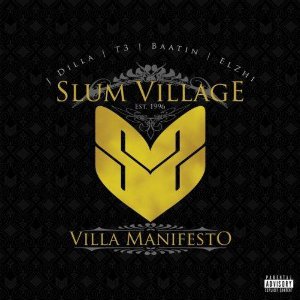 The scene has never been kind to Slum Village; even before they lost two members to untimely deaths (Jay Dee a.k.a Dilla and Baatin) they had been through more label wrangles and stop-starts than any band should have to endure in an entire career. Their game changing first LP Fan-tas-tic Vol.1 only existed as a bootleg for eight years, and the follow-up Fantastic Vol.2 was not only stalled as labels went in and out of business but received a lukewarm reception by critics on its eventual release. By the time Dilla gained the notoriety that had always eluded him, he had left the band to pursue a short-lived solo career and Slum Village seemed like a forgotten memory of a chance only just missed. For me, Fantastic Vol.2 came at just the right time; I still remember scoring it on release day from Tower Records in Birmingham and listening over and over again, never growing tired of its charm and startling accessibility. It was the perfect intro to the band, and what many critics saw as a negative (the silky neo-soul vibes, Dilla’s slick reworking of older, more lo-fi jams) I just couldn’t get enough of.

Ten years and one return-to-form later (2005’s excellent and underrated self titled LP) Villa Manifesto finds Detroit’s finest hitting a surprisingly rich seam of creativity. Despite emerging from a five year hiatus with only one founding member left (the enigmatic T3), the band somehow recapture the energy and spirit of their early days. The sound of Slum Village has always been crucial to their appeal, and finding a unified groove was what made their Slum Village LP so successful. They are a rare act that manages to sound just as comfortable in the club as in the headphones, and Villa Manifesto continues that tradition with a sparkle that’s become a rare commodity in the genre. Production has mostly been handed to long-time collaborator Young RJ, who handles the unimaginable task, and breathes originality into the tracks without sacrificing the band’s tried-and-tested vibe or heart. The Moondog-sampling ‘Um Um’ demonstrates this perfectly with an off-time woodblock beat tripping underneath the island-vibes of the lead vocal. This is Slum Village for sure, but I get the feeling Young RJ doesn’t necessarily let the fact that he’s in Dilla’s shadow bother him as much as it might a less experienced producer.

The spread of emcees manage to hold their own too; T3 takes the lead of course, but the best verses are laid down by the prodigal eLZhi who more aptly ducks and dives around the beats with a veteran’s skill. The less we mention about Dilla’s younger brother Illa J’s verses the better, but thankfully they, for the most part, are buried by the production.  At least it could be said that he’s following in his brother’s footsteps – it’s easy to forget that Dilla held down probably the weakest flows on Fantastic Vol.2. The late Baatin appears for posterity, and gives us a taste of what the rumoured SV reunion might have sounded like, but this is T3 and eLZhis’s record, and they deserve all the praise coming to them for pulling off the impossible. Overcoming the industry as well as their own growing legend couldn’t have been easy, but the band has emerged successful, and produced an album worthy of their legacy. All that’s left to do is enjoy the tunes one of the last remnants of an underground now almost forgotten.