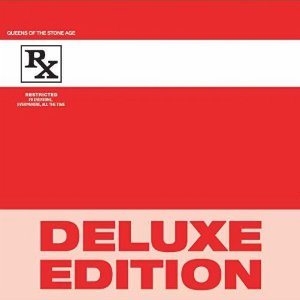 It’s times like this that you feel old. Well, maybe you don’t, but I do. No way was Rated R released a decade ago. But here we are, with a deluxe digipak and bonus disc of an ancient Reading Festival set. Surely you know this one. Actually, maybe you don’t. Leafing through the Guardian Guide’s insipid review of last decade, this writer was bemused to see QOTSA lynchpin Josh Homme described as a one hit wonder (that hit being ‘No-One Knows’) who ruined the Arctic Monkeys. The mind boggles.

So, for those who are ignorant of Homme and his Queens, this reissue is perfectly timed, and should be received as though it was manna from heaven. A decade before Rated R was out, QOTSA originators Homme and bassist Nick Oliveri were in a soon-to-be revolutionary band called Kyuss. After a few albums of blowing people’s minds with their equal mix of Black Flag and Black Sabbath, they split at their creative and commercial height. While Kyuss singer John Garcia formed great, but short-lived, bands like Slo Burn and Unida, Homme was readying QOTSA, a band he originally described as “robotic trance-rock”. Their eponymous debut should have achieved beyond the cult success it did, which is perhaps why their laid-back slacker style was expanded upon to a ludicrous degree for the follow-up, and major label debut. Rated R was that record, and its eclecticism ably filled the void left by the then recently deceased Faith No More.

By 2000, Homme’s group-improvisational side-project, the Desert Sessions, was onto its sixth instalment. Its philosophy of bringing in a looser approach to personnel, allowing a wider range of sounds, massively informed Rated R. So it was that the debut’s power trio (completed by Alfredo Hernandez, who played drums on the final two Kyuss records) was exploded into a ramshackle mob, focused on Homme and Oliveri, but including Mark Lanegan (with whose Screaming Trees Homme toured as second guitarist in 1996), Masters Of Reality man (and fantastic rock producer) Chris Goss, Judas Priest singer Rob Halford and numerous non-famous, but essential, scene musicians like Dave Catching and Gene Trautmann.

The variety on offer is belied by a relatively straight opening. Singles ‘Feel Good Hit of the Summer’ (a list of substances, legal and illicit, repeatedly stated, in super-rawk fashion; rock and roll distilled arguably to its purest form) and ‘Lost Art of Keeping a Secret’ (which surely should’ve been as big a hit as ‘No-One Knows’?) are still an effective one-two punch a decade on, but it is after these have passed that things get really interesting. ‘Leg of Lamb’ and ‘Auto-Pilot’ approach laid-back in different ways, with the former clearly Homme-ular in its clean, looping, edges, while the latter is a wonderful modern update on 60s psyche, with harmonised break-down, that sat perfectly within Oliveri’s later set-lists with his own band, Mondo Generator.

Mondo Generator, the meaner, more brutal kid brother to QOTSA, is represented later on Rated R. Furious groove-hardcore sleazeplosion ‘Tension Head’ is actually a cleaned-up ‘13th Floor’, from Mondo debut record Cocaine Rodeo. It’s great that the band takes influence from within and without, especially because this howling, Oliveri-led, track adds dynamic counterpoint to the cool drawl of Homme. Similarly, Oliveri’s aural mugging that is ‘Quick and to the Pointless’ – presumably informed by his time spent as Rex Everything in the Dwarves – sits perfectly between Desert Sessions re-do ‘Monsters in the Parasol’, featuring paranoia simulation from Goss, and ‘In the Fade’. The latter is especially noteworthy, partly for its sunny instrumental homage to Mungo Jerry’s ‘In the Summertime’, but mainly for the complete bliss it achieves with Mark Lanegan – owner of the best voice in rock, by a country mile – crooning over Homme backing vocals. In terms of Lanegan career peaks, it’s up there with the divine heights of Screaming Trees’ ‘Sworn and Broken’ and Lan’s own ‘Sleep With Me’. Best song on the album? It’d be the best song on most albums.

But the fact is there is glorious success everywhere you look on this record. ‘Better Living Through Chemistry’ is the closest thing to a Kyuss song on here, as earnest drug-punk-metal gives way to spaced out sections of weightless serenity while ripping off choruses from Björk’s Debut. ‘Lightning Song’ is a brief slice of guitar of the type one might find on an early Sabbath record; an appetiser before the deranged mini-epic that is ‘I Think I Lost My Headache’. ‘Headache’ itself is a lumbering, disorienting beast that slides from woozy see-saw psychedelia, to Y2K Steppenwolf rocking, to insane brass looping to finish.

The bonus disc is nothing to be sniffed at, either. Again, it’s a mix of the old (the brilliant ‘Born to Hula’ first featured on the classic Kyuss/QOTSA split EP, on Man’s Ruin records) and the newer. Covers of Romeo Void (‘Never Say Never’) and the Kinks (‘Who’ll Be the Next in Line’) are perfectly fine, but the real treasure here is their complete Reading Festival 2000 set. Featuring debut album highlights ‘Avon’ and ‘Regular John’, as well as the insane extended version of ‘You Can’t Quit Me Baby’ that featured on their winter 2000 tour with Monster Magnet, and a selection from Rated R, it’s a shame their set wasn’t longer than nine songs.

Like Radiohead’s Kid A, released a few months after this, Rated R is one of those stunning moments when mainstream rock was legitimately exciting, and a record the band hasn’t come close to matching in the intervening decade. It recalls a time when desert rock was at its healthiest, with Homme’s bands joining Unida, Ché, earthlings?, Yawningman, Masters Of Reality and Fatso Jetson in a stunning scene, it’s essential, and it hasn’t aged a day since it was released. It’s probably for the best that Homme is an alleged one-hit wonder, if his misses are as perfect as this.