Stones Throw will release a compilation of music by Bruce Haack, Farad: The Electronic Voice, at the end of August.

Canada-born Haack (1931-88) was a visionary composer and builder of instruments perhaps best known among record-collectors for his apocalyptic 1970 concept album Electric Lucifer. Though very much a cult concern, his influence on electronic and avant-pop music has been considerable, and in 2004 he was the subject of a documentary film by Philip Anagnos entitled Haack: The King of Techno and featuring contributions from fans including Mouse on Mars, Eels and Money Mark. His music was reinterpreted for a 2005 tribute album, Dimension Mix, by the likes of Beck, Stereolab and The Apples In Stereo.

“Of all the electronic music pioneers whose radical experiments are finally reaching a wider audience, Bruce Haack’s music is probably the most enjoyable: any man who can score Kraft Cheese commercials in the 1950s, write an album called Haackula and finish his career with a brilliant 12” on Def Jam deserves at least one proper retrospective.

“A music school drop-out, Haack spent the ‘50s doing everything from writing pop songs and musique concrete to playing home-made heat-sensitive synthesizers on the foreheads of TV show guests.  His experimentation somehow led him to the field of educational music for children, in which he created his best-known work. Released throughout the ‘60s on his own Dimension 5 label these albums are both whimsical and haunting, truly futuristic and yet grounded by the most innocent and everyday concerns of the kindergarten teacher.

“  Yet Farad is concerned with the music Haack made in the 70s and 80s for adults, starting with his conceptual electronic psych-rock masterpiece (and, fantastically, major-label debut) Electric Lucifer. Its theme is no less than all-out war between heaven and hell, where hope is derived from the force of ‘powerlove’ and joy from the Moogs and the proto-vocoders.

“Like his friend Raymond Scott, many of Haack’s instruments were homemade, and in his case often improvised from found items and assembled without any clear plan of the final outcome. This compilation brings together Haack’s lush electro-psych grooves and a variety of his more abstract recordings, and highlights his use of the Farad, one of the very first vocoders, which Haack invests with rare emotion.   Amidst all the electronic drones and effects, Bruce Haack created something strikingly primal and human, posing man and machine as neither in conflict or unity but as partners in the same exploration of music and sound.” 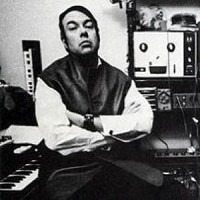