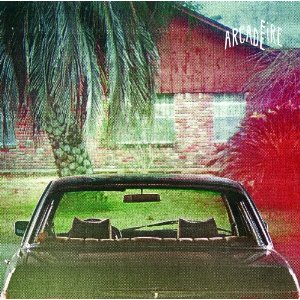 Ah yes, suburbia, what a bastard that is. Parents’ good intentions twisted into small town ennui, the listless quest for identity and tasteless housing; it’s such a drag when you’re young and arty and cool. Maybe that’s why rock has a legacy of dwelling on it – of taking the suburbs’ relentless anti-romanticism and sharpening it into something melancholic and sad.

It’s even sadder when it’s not anger which you look back with, but resignation. Of course, it’s hardly any wonder that The Arcade Fire’s Win Butler is feeling a little emotionally spent – three albums in and the Montreal septet have grappled with personal loss on Funeral, then the big issues were set in stadium-sized choruses on Neon Bible. Now, The Suburbs is the extended rumination on home, as somewhere from which you fled and the place to which we’re going. On the album’s country-flecked opener and title track, the spectre of Neil Young looming large, Win Butler sums up the album’s theme in one touching line: “Sometimes I can’t believe it, I’m moving past the feeling”. It’s telling that the same lyric will be reprised at the album’s close. After all, there’s nothing more jarring than the knowledge that we’re just a trip back home away from stirring up some of the biggest questions of all, that nostalgia is just an old bedroom away from being revealed as fake.

But this isn’t an album concerned only with the past – despite what the polaroid tint of ‘City of No Children’, with its Springsteen guitars and memories of long summers – would have you think. Rather it’s the long shadow it casts on the present: on both ‘Rococo’ and ‘Modern Man’, it’s modernity that is under fire. On the latter, Butler turns the bitterness against himself in a bout of the sort of self-awareness that creeps into your twenties and unpicks you bit by bit (“in my dream I was almost there but you pulled me aside and said you’re going nowhere”). ‘Rococo’ sees this angst turned outwards towards to the “modern kids”, congealing into bitterness across a suitably baroque melody that builds slowly, the music coming together just as language falls apart.

Due to the heft of the subject matter, the newly-honed diversions into an electronic palette should have served to pierce the portent. Instead, the forays remain pretty asinine – a subtle John Foxx bass line is too restrained to mask the U2-isms of ‘Half Light II’. ‘Sprawl II’ is mildly braver, the analogue arpeggios conjuring up the spirit of a limp ‘Heart of Glass’, until the half way point where those synths begin to sound a little less benign. But these blemishes are masked by the album’s sweep, its grace in voicing universal anxieties and, most of all, its accessibility. The Suburbs is one last attempt to understand what it means to be an adult in the face of the unavoidable future of settling down and becoming your parents.