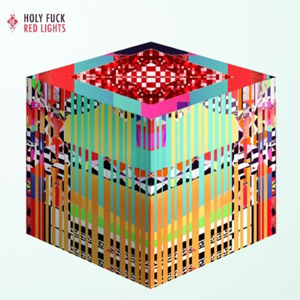 Improvisational electronica can often be a difficult child to love, but Holy Fuck have already shown that they’ve got a knack for breathing new life into a genre that can sometimes seem obsessed with navel-gazing. The second release from their recent album Latin on Young Turks, ‘Red Lights’ is no attempt at high art but is instead a textbook example of how to pair a simple guitar groove with an insistent drum beat, especially if that textbook was written by a disco casualty who recently discovered Primal Scream’s Vanishing Point. There’s a scuzzy, funk-fuelled energy that propels this track through ever-mounting crescendos, and Brian Borcherdt’s keyboards do an ample job of lending ‘Red Lights’ a rough texture, creating something that commands you to stomp like a jack-booted storm trooper. The B-Side continues the seventies theme, with a distorted bass that possesses more than a hint of a Blaxploitation soundtrack.

Set amongst the other tracks on Latin, ‘Red Lights’ stood out as the most outright danceable and emotionally upbeat number and listening to the track in isolation imbues  it with an added sense of vitality. It’s hard not admire Holy Fuck’s strict adherence to their remit of creating electronic music without laptops or computer programming – the results are often surprising and always entertaining, and ‘Red Lights’ is no exception.