Seemingly days after the UK release of Zola Jesus’ Stridulum II, Sacred Bones have announced a new EP from the singer/songwriter to be released on October 12.

The Valusia EP includes the track ‘Poor Animal’ which sees Zola Jesus, real name Nika Roza Danilova, work with producer Chris Coady for the first time. It also features Culture of Youth’s Christiana Key on violin and is described in the press release as an ‘airy, danceable track’.  We’ll be interested to see whether this indicates a new direction for the 21 year old, something that is hinted at by the EP cover’s depiction of a softer and noticeably blonder Danilova.

The EP will also feature a re-recording of past hit and live highlight ‘Sea Talk’, the moody ‘Tower’ and the piano-ballad ‘Lightstick’ which also appeared on Stridulum II. The CD will include videos for ‘Night’ and ‘Clay Bodies’ by Jacqueline Castel. 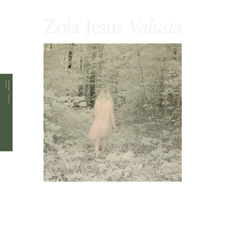