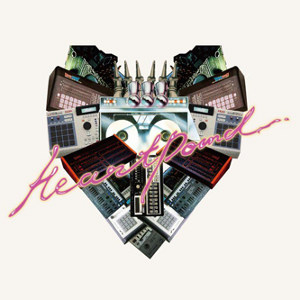 FunkinEven is a producer who can’t help but let his personality bleed through onto each of his productions. An encyclopaedic knowledge of electronic music allows him to meander down the aisles of dance history, selecting genres at will and adding them to his machine-funk shopping basket. This time it’s the turn of old skool rave, hardcore and classic electro to be affectionately co-opted and re-sculpted by the West Londoner. Nostalgia isn’t always a bad thing, and that’s certainly a philosophy that FunkinEven has applied generously to the tenth release on Eglo.

‘Heartpound’ revolves around an acid bassline, orbited by a tongue-in-cheek vocal and insistent piano keys. The producer’s intensive work ethic shines through here and the end result is a fun and competent – if not exactly groundbreaking – number. It’s B-side ‘Another Space’ that elevates this single above efforts from FunkinEven’s peers: another track that wears its old skool aspirations on its sleeve, its relentless hardcore stabs and some scarily effective drum programming are liable to make you jerk like an electrocuted zombie. Detroit-esque strings and an unashamedly over the top vocal pleading to “let me take you off” are the other winning components to a cut that the producer clearly enjoyed making.

Neither side of the EP takes itself too seriously, which in a world of po-faced dubstep and routinely soulless house is almost certainly a good thing. With a remix of Hyperdub’s Ikonika and appearances as part of the Fatima live band in the pipeline, this single secures FunkinEven’s reputation as a versatile and talented addition to the Eglo family.