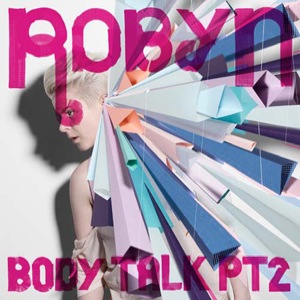 I’m not sure exactly what’s happened to Robyn in the past to make her so distrustful of emotions, but her fans should be grateful that it’s provided such a deep source of inspiration for the Swedish singer. 2010 is shaping up to be a prolific year for the synth-pop icon, with the second of three mini-albums to be released this year picking up where part Pt. 1 left off, a quantity-focused approach not hindering Robyn’s knack for penning a catchy melody.

Euphoric opener ‘In My Eyes’ sets the tone for the album, with Robyn’s voice surfing waves of synths underpinned by chunky beats. While there’s a recurrent theme about staying guarded against strong emotions and the dangers of blurring the boundaries between friendship and love, the songs themselves are genuinely upbeat and the album flits seamlessly between the Rihanna-esque electro-r’n’b of ‘Criminal Intent’ and the out-and-out pop of ‘Hang Out’. Body Talk Pt. 2 reunites Robyn with past collaborators Diplo and Kleerup and there is a keen awareness of the dance floor that was occasionally lacking in Pt. 1. The unlikely duet with Snoop Dogg on ‘U Should Know Better’ also shows that Robyn is still capable of surprises, even if it features her unconvincingly trying to persuade us that “even the Vatican knows better than to fuck with me”. The fact that the track itself is only a handful of snares away from the electro-drum’n’bass of John B shows that she’s still trying to push the boundaries of pop music.

As with her acclaimed self-titled debut, Robyn manages to strike a balance between sincere reflection and mischievous fun that’s as enjoyable as it is endearing, and it’s hard to dislike any album where the singer offers up the platitude “this one’s for the grannies, take a bow”. Eight tracks is about right for one sitting, ensuring that the pace doesn’t let up until we reach the acoustic finale of ‘Indestructible’. In essence this is another short, sharp dose of Robyn and just enough to keep her fans satisfied until she releases Pt. 3.