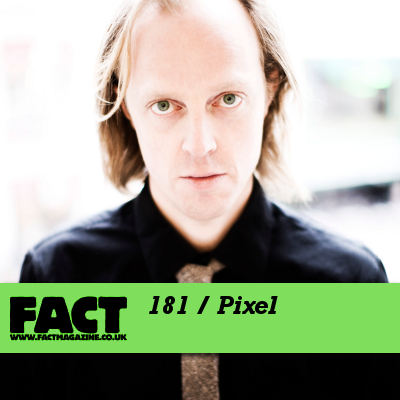 FACT mix 181 is a journey into austere electronic minimalism, steered by Pixel.

Pixel – real name Jon Egeskov – is a member of the esteemed Raster-Noton family, having released three albums on the label to date. He debuted in 2003 with The Display, following it with a collection of live studio recordings entitled Set Your Center Between Your Parts In Order To (2006). Pixel’s most recent offering is 2009’s The Drive, wherein he sets out to evoke an imaginary journey by car across the USA, via limber digital rhythm, the deep hiss and hum of guitar amplifiers, the churn and chatter of seemingly sentient micro-processors.

His mix for FACT includes four original Pixel tracks, with the rest of the tracklist made up largely of contributions from other Raster-Noton artists –  Alva Noto (Carsten Nicolai), Ryuichi Sakamoto, Cyclo (Nicolai & Ryoji Ikeda) and Frank Bretschneider, the latter with no less than six untitled pieces. There’s also room for ‘Twenty’ by Labradford, whose psychogeographic post-rock and ambient meanderings in the 1990s no doubt acted as a formative influence on the young Egeskov.

Pixel will be performing live at the Alpha-ville festival in London on September 17-18. He joins an international line-up of audio-visual innovators and up-and-coming talent, including Actress, Subeena, Bola, Scanner and The Boats. Find out more here.