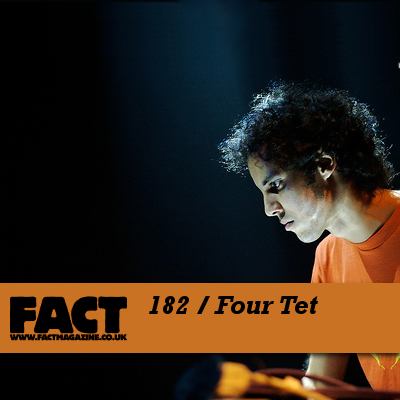 This Monday’s FACT mix is by a man named Four Tet. He should require no introduction.

Born Kieran Hebden, Four Tet was already making waves as a member of the group Fridge when he dropped ‘Thirtysixtwentyfive’, his 1998 debut single for Trevor Jackson’s Output label (you can probably guess how long the track lasted). A debut album, Dialogue followed, but what really propelled Hebden to stardom – and set the tone for Four Tet as one of music’s most celebrated and in-demand remixers, later lending his magic to Bloc Party, Radiohead, Anti-Pop Consortium and many more – was his remix of Aphex Twin’s ‘[Cliffs]’, commissioned for Warp Records’ Warp 10 + 3: Remixes collection.

A series of acclaimed albums for Domino followed, along with more improvisational collaborations with late jazz drummer Steve Reid, the end credits of a Bond film, and a blink-and-you-missed it 12” release with Burial, accumulating in this year’s There Is Love In You – arguably Hebden’s most realised, composed, and beautiful album to date.

A large part of Four Tet’s musicianship in recent years has revolved around his residency at Plastic People, the much-loved East London club that earlier this year faced closure. Well, seeing as it’s now re-opened, Hebden will be restarting his residency this Saturday, September 11, and this mix is done to celebrate it. Ramadanman, Villalobos, Oni Ahyun and more feature, along with Four Tet’s own mixes of Rocketnumbernine and Bob Holroyd, and an original new Four Tet track for Soul Jazz’s Future Bass compilation.