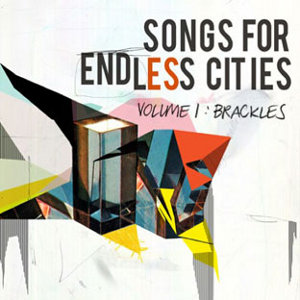 Rob Kemp has, for a little while now, been at the forefront of UK club music, keeping pace with a music scene that seems to warp and fluctuate with every new release. With a keen knowledge of essential tracks scattered across sub-genres, not to mention his releases on Apple Pips, Planet Mu and his own Blunted Robots imprint, it’s no surprise to see Kemp – better known as Brackles – curating the first instalment of Songs for Endless Cities; a new mix CD series from !K7. What is surprising is to hear the usually reliable Brackles construct a mix which simply fails to inspire.

As you’d expect from a DJ whose mixing ability is as widely lauded as Kemps, tracks flow together effortlessly – taking you from the trickling skip of Zomby’s ‘Tarantula’ to the clap-happy soul of Roska’s hypnotic ‘I Need Love’ with ease and panache. There can be no justification for scrutinizing Kemp’s mixing – or indeed his track selection, which gives us some of the best cuts from Deadboy (‘If You Want Me’) 2562 (‘Dinosaur’) and Cooly G (‘Love Dub’ refix) while offering an accurate, wide-angled snapshot of the definitive contributors to this particularly skewed, exciting branch of dance music.

There is however, room for improvement. As pleasing as it is to hear a mix that picks so tactfully from the broad spectrum of excellent releases that 2010 has seen, there’s something in Kemp’s mix that fails to energize, to lift it beyond the realms of being simply, a good solid mix – something that, in 2010, we’re swamped with. Brackles certainly has a formidable quotient of knowledge with regards to the music he uses, and that’s what makes the lack of vitality or vivacity on display here all the more bewildering as sadly, what should have been a spectacular introduction to K7’s new mix series raises sleepy smiles, not grins.