The esteemed journalist and broadcaster, best known for his formidable 1991 punk tome England’s Dreaming, aims here to pay tribute the first wave of Cali punk, pulling together routinely angry and anti-establishment – if often darkly humorous – tracks from the likes of The Dead Kennedys (pictured), The Germs and The Zeros. There’s a more in-depth explanation of the project’s motivation in Savage’s sleeve notes, which are reproduced below:

“This compilation celebrates the first wave of California Punk that briefly flourished between 1976 and 1980. Before then, there were a few glitter + cuspy street rock/ power pop bands – in Los Angeles, the Pop, Zolar X and the Nerves, in San Francisco, La Rue – while afterwards came the deluge: Hardcore, Rockabilly Revival, Industrial, and mainstream Power Pop.

So there were two to three years where – while admitting a generalised loud and fast punk template – almost anything went. Anyone who visited California in 1977 and 1978 could see that the major labels would never give the new generation of groups access to proper funding, television, radio and supported tours. They existed in a black hole. But in that vacuum they found freedom.

As the co-founder of key LA punk zine Slash Claude Bessy remembered, ‘the record companies and media were all hippies who had made it, and they were very hostile. But that’s when it got really good. We decided it was our party, nobody is interested, let’s go wild. It definitely seemed that we were going to be rejects forever’.

Californian punks were self-starters, creating an infrastructure out of nothing: venues like Brendan Mullen’s guerrilla club, the Masque; fanzines like Slash, Flipside, Search and Destroy out of San Francisco; and of course groups, ranging from sped-up rockers and pure punkers to synth experimenters and agit-prop consciousness raisers, leavened with the theatre of the absurd.

Having experienced a taste of this squalling subculture – I was very disappointed that it got almost no media attention in the UK. I’d get sent the records by Search & Destroy’s V.Vale and I couldn’t believe how good they were: easily as good as anything being produced in the UK, if not better in their black humour and earthy swing.

It was chauvinism of course, and nationalistic chauvinism at that – doubly nauseating. England had become ‘the world’s Punk Rock Centre’ – never mind that the idea, or a variant thereof, had also occurred to the alert and the alienated in New York, Cleveland, Paris, maybe even Chickasha, Oklahoma. And so its music press had to maintain the position. By slagging off the Yanks.

As if it was needed, this compilation should address that historical neglect. It has been gratifying to see Cali Punk given its due by recent oral histories like Brendan Mullen’s “We Got The Neutron Bomb: The Untold Story of L.A.Punk” (with Marc Spitz), and “Lexicon Devil – the Fast Time and Short Life of Darby Crash and the Germs” (with Don Bolles and Adam Parfrey 2002).

But the music contained herein needs no further justification than the fact that it rocks; that it contains ideas, tunes, anti-establishment rants, sharp comments about the world, attempts at transcendence and plenty of savage wit. Because it has remained an open secret, it hasn’t become a cliché, and so sounds as fresh as the day it was recorded.”

This is the second compilation that Savage has made for Domino, the first being 2008’s Dreams Come True: Classic Wave Electro 1982-87. It’s due to be released on November 15, on CD and digital download; more info and pre-orders here. 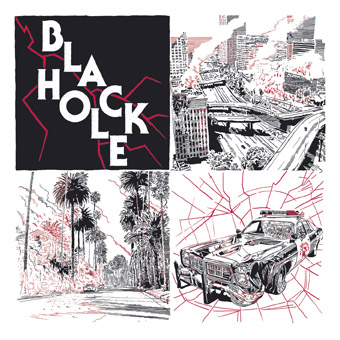