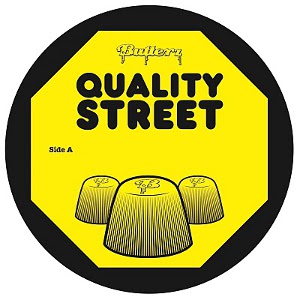 Grime is like a box of chocolates. No? Fine. Well, Quality Street, as the name and artwork would suggest, is a delectable taster for the current rejuvenation of instrumental grime music. Butterz, the newish label run by Rinse FM DJs Elijah and Skilliam, is the single largest driving force for the grime renaissance in progress in 2010; armed with a distinct aesthetic both sonic and visual, dubplates for days (and ever-growing), an arsenal of the genre’s finest producers and a pair of charismatic frontmen at the head of it all, they’re the kind of confident label that builds a legendary reputation before it even gets started.  In this case, it’s kind of true.

Poor Butterz seemed cursed for a while; their first release was Terror Danjah’s stunning Bipolar EP, released at the same time as Danjah’s debut on Hyperdub which understandably overshadowed the fledgling label. Their second release – this mini-label-showcase EP – was meant to be released all the way back in February, but here we are in September and it’s only just now getting out there.

For anyone paying attention, their series of free monthly mixes and weekly Rinse FM shows are where grime happens; where grime lives, grows, and mutates, creating and driving trends and themes.  As prominent labels like Hyperdub and Mu latch onto the genre, releasing music by legends and newcomers alike (Terror Danjah and Swindle come to mind, along with Numan’s forthcoming grime-influenced EP), Butterz steams full bore ahead, leading the pack with a too-good-to-be-true release schedule and kicking off with Quality Street.

Enough yammering; what’s the music like, you ask? Quality Street collects new tracks from four of the Butterz stable. Terror Danjah provides an update on the halloween atmospheres of last year’s Gremlinz with the cheekily-titled RIP mix of ‘Creepy Crawler’, recklessly throwing the track into rubber walls as it dizzily recoils back and forth, endowed with the sort of instant flashpoint stop-start that so dominates his recent post-retrospective work.

SRC, one of FACT’s producers to watch for 2010 and already looking accomplished with releases on Numbers and No Hats No Hoods, nails down the EP’s best moment with his ‘Goomba VIP’, a snaky charm that somehow manages to merge the narratives of 8-bit videogame nostalgia and sino-grime with its undulating melody and unmistakable Super Mario Bros sound effects.  The lesser-known Mr. Mitch provides another unconventional tune with ‘Skittles’, which takes a saxophone sample and quite literally runs with it, breaking out into an infectious 8-bit sprint propelled by deeply funky slap bass.  Royal-T’s lengthy workout ‘Hot Ones (Remix)’ drags down the cartoonish glee a bit with its five minutes of pummeling acid hammers, a bit like something from early AFX – think Analogue Bubblebath 3.

Through this EP, what’s most striking here is the sheer amount of colour, cartoonish motion, and swagger these tracks carry; they’re alternately funny, screwfaced, and frantic, turning inward the manic depressive nature that seems to constantly dog the grime scene (Wiley, anyone?) and channeling it completely into the music. There’s no need for zany antics, personal gimmicks or beefs in this instrumental grime music – the beats speak for themselves.   If you can learn their language, you’ll never want to go back.