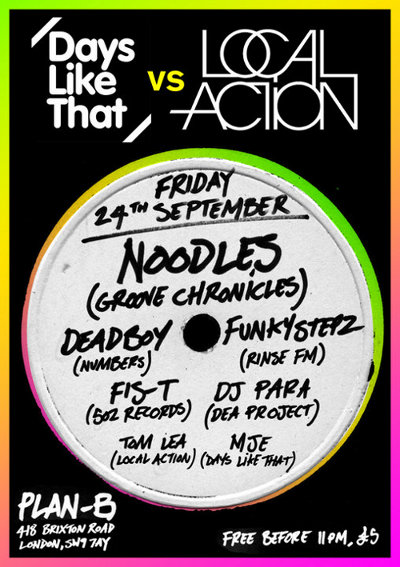 UK garage night Days like That are teaming up with Local Action, the label run by FACT’s own Tom Lea for a superb looking night at Plan B this month.

Headlining is Noodles, one half of the legendary Groove Chronicles duo with El-B. Together they completely changed the UK garage landscape, and their ‘Stone Cold’ is regarded by many, including Burial, as the 2step anthem, with one of the most undeniable bass drops of all time. With vintage dubs from El-B, MJ Cole and more, this set is not to be missed.

Also on the bill is South London’s Deadboy, one of the brightest stars of the current UK dance scene. His original productions on Numbers and Well Rounded and his refixes of Amerie, Cassie and more represent some of the best music of the last couple of the years, and his FACT mix from this year is one of the best we’ve had. We actually had it on today.

Rinse FM staple Funkystepz are in the house; they possess one of the best shows on the London station, and with the sublime Sounds of Malibu EP due out later this year, you can expect to hear a lot more about them soon. Fis-T, who just released one of the year’s biggest anthems in ‘Night Hunter’, makes his debut under the Fis-T name.

Last but definitely not least, DJ Para from the legendary 2step collective DEA Project plays, in the form of a showcase for his Yosh Records imprint. Residents MJE (Days Like That) and Tom Lea (Local Action) will be warming up and winding down.

It all takes place on September 24; doors open at 10pm and entry is free before 11; it’s £5 thereafter. The Facebook event page can be found here.