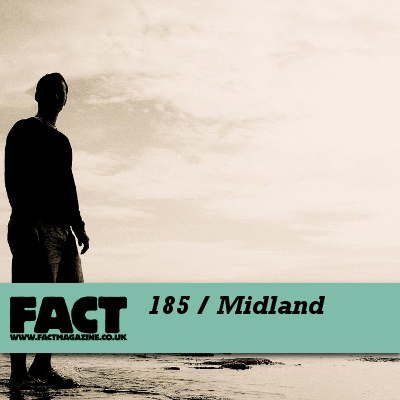 The up-and-coming producer/DJ announced his arrival earlier this year with the ‘Your Words Matter’ 12″, a collaboration with his friend Ramadanman released on Will Saul’s Aus Music label. This was followed by Play The Game, a four-track EP on Phonica Records that really showcased the breadth of his sound. Midland makes warm, tensile house and techno, but the narrative shape of his tracks and his regular deployment of fragmented, ethereal vocal snippets betray the influence – conscious or otherwise – of dubstep individualists Burial, Pangaea and Joy Orbison.

If his epic 23-track FACT mix is anything to go by, our man also draws inspiration from much further afield. It’s packed with unreleased material, including Midland originals ‘Shelter’, ‘Hub’ and ‘Dead Eyes’, together with his remix of Caribou’s ‘Sun’ and cheeky re-edits of Washed Out and Massive Attack, and Appleblim & Ramadanman’s immense, forthcoming ‘Void 23’. There’s also classic house from Kerri Chandler, shark-eyed minimal from Arnaud Le Texier  and DJ Koze, plus recent cuts from Space Dimension Controller, Workshop, 6th Borough Project and a special edit of Boards Of Canada exclusive to this mix. See next page for a Q&A with MIdland, including details of his current and upcoming releases.

How did you get to where you are now?

“In life I got here by studying History at Leeds uni and then decided to stay up for a couple of years to make music. Musically i’ve always been in to all sorts but cut my teeth DJing drum and bass all around the city under my Apt Pupil alias. I had a show on the city’s leading underground station Frequency FM for 3 years, of which I have so many fond memories, and DJed quite a bit around the city. Last summer I walked the Camino de Santiago which is a 860 km trek across the north of Spain and had a self imposed iPod/music ban. When I came back I just kept on finding myself coming back to the slower speeds and after writing ‘Your Words Matter’ with David [Ramadanman] I just felt like for me, drum and bass had run its course and I decided to focus on things in the 110-135 bpm bracket. Around February I was approached up by the guys from Stealth Management, James Mountain and my now manager Chris Gold saying they were into my stuff and wanted to manage me. They have been a massive help in all aspects of my life as an ‘artist’.”

How did you meet Ramadanman, and do you work together often? Does he influence your music in a large way?

“I lived in the flat above him in our first year at university, which was actually before his first ever release. Madness. We’ve been mates ever since and it’s a friendship forged through buying records, having mixes and disagreeing over cooking techniques! We’ve now lived together for three years. ‘Your words matter’/ ‘More than you know’ was the first and as yet only thing we have seriously worked on, mainly down to the fact that he is mad busy these days and I’m starting to get that way. Think a yearly 12-inch is the deal we’ve agreed on. Musically i’d say it’s impossible not to take subconscious inspiration from someone after living with them for that long, and we definitely vibe off some similar things but we also do things differently and have learnt to appreciate that. It’s wicked to live with someone who knows what a low pass filter is though and its always good to nick all his kit [laughs].”

Your Play the Game EP seemed quite ghostly – disembodied voices snaking through it, distant FX, all that. Is that aesthetic something you’re drawn to?

“I do have a bit of a soft spot for the melancholy and love music which gets the hairs on the neck standing on end. Music with soul and a strong sense of melody is the order of the day. I like the idea of making music which is open to interpretation and that people can draw their own vibes and experiences from. I didn’t write the tracks in sequence for the EP, they were written over 5-6 months and I was approached by Phonica after they were done so they act as quite a good cross section of my early ideas and influences.”

Any other aesthetics or imagery you find cropping up in your tunes?

“I often find myself being drawn to sounds and tunes that have a bit of character and warmth to them.  Recently i’ve been digging lots of Washed Out,  Solar Bears, Bibio and Boards of Canada who all seem to impart a sense of nostalgia whilst still making it sound futuristic. Themes like this are definitely a strong influence when I’m making music. That said, my mood and ideas change constantly, so some days I’ll want to make something lo-fi, stripped-back and dirty and some days make something cleaner, more detailed and heavy.”

What do you build on? And what your process usually like when it comes to making music?

“Musically I’m a bit of a perfectionist – I’m not saying my results are perfect [laughs], but that I seem to spend a lot of time tweaking. Usually I start by getting the percussive elements and the drums going and try and set a groove there. The next step is to move on to the atmospherics and melodies. I love doing the atmospherics because you can literally use anything, from field recordings to twisting old samples and recordings, the possibilities are endless. Arrangement is probably the most important part for me and often the part I struggle with most because I like tunes that develop instead of just looping and so that’s the part I spend the most time on.”

What else do you have going on, music/release-wise?

“A few things over the coming months, my remix of Lone’s ‘Once in a While’ is coming on Werk Discs, and my remix of Stateless’ tune ‘Aerial’ on Ninja Tune. I have a tune signed to the next Aus All Night Long comp called ‘Shelter’, and as well as that I will be giving away my re-edit of Caribou’s ‘Sun’ and have an EP coming on This Is Music at the end of the year. Apart from that I’m gonna be working closely with a few labels, continuing with Aus and Phonica and then some new labels like Fina and Glass Table. Otherwise just doing some more remixes and just generally trying to stay as productive as possible.”

Where do you see yourself in a year’s time?

“Anyone’s guess, but hopefully just continuing to be able to do what I love for a living, meeting interesting and passionate people and DJing more.

Tell us about your FACT mix…

“I think a mix set and a club mix are two very different things and I think a recorded mix is a chance for you to tell a story and include more tunes that perhaps you wouldn’t be able to in a club. Some of my favorite mixes, like the second disc of Joris Voorn’s immaculate Balance CD or Ewan Pearsons And So To Bed mix both start somewhere deep and weird and take you through the paces. The idea with this mix was to try and plot a line through all the bases of my collection, starting with the slower more eclectic stuff and eventually ending on what you’d see me playing in the club.”