tobias.‘s classic ‘Street Knowledge’ has been reissued on 12″ vinyl, bolstered with a previously unreleased remix by Ricardo Villalobos.

‘Street Knowledge’, one of the most addictive and enduring dancefloor tracks to come out of Berlin in the last decade, was originally the title track from 2006’s Street Knowledge EP. That EP, which came courtesy of France’s Logistic Records, was Tobias Freund’s debut solo release under the name tobias., though he has of course been a formidable presence in electronic music for the past 25 years, collaborating regularly with Dandy Jack and Uwe Schmidt (Atom TM) and producing a seminal body of work with Max Loderbauer (latterly of the Moritz von Oswald Trio) as Sun Electric and NSI.. The tobias. project was instigated to provide an outlet for his purely dancefloor-aimed creations.

The 12″ reissue dispenses entirely with the three supporting tracks from the  EP (‘Solid State’, ‘East Of Lexington’ and ‘Bayside’), stretching the original ‘Street Knowledge’ across an entire side of wax, and giving up the B-side to the new Villalobos mix. The Chilean producer delivers a typically expansive (just over 12 minutes, natch) and intricate version, and while it’s plenty absorbing, it could never top the lean, sinewy power of the source material.

It’s pressed on a white label record with printed text and catalogue number SK, and you can listen to a clip of the Villalobos remix here. Check the original ‘Street Knowledge’ above. 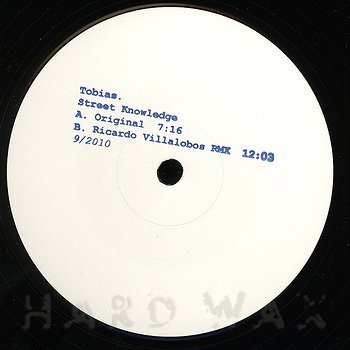