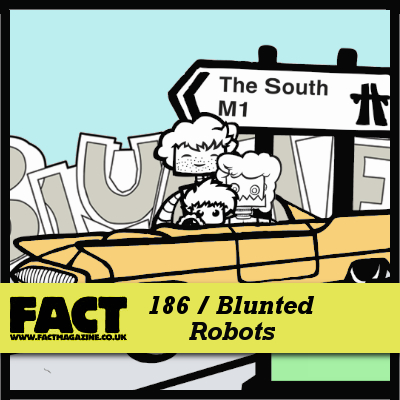 This Monday’s FACT mix is an exclusive-filled session from one of the most promising dance labels around, Blunted Robots.

The work of Brackles and Shortstuff, the label debuted last year with Martin Kemp’s (Brackles’ obscenely talented brother) ‘No Charisma’, a crossover anthem that seemed to infiltrate the sets of everybody going, backed with Mickey Pearce’s ragga stomper ‘Innami’. Two more Martin Kemp 12”s have followed, broken up by Bok Bok’s seasick ‘Citizens Dub’ and another minor classic from Brackles and Shortstuff, ‘Pipey D’.

The fifth Blunted Robots 12”, a collaboration between Brackles, Shortstuff and Nottingham vocalist Terrible Shock will be out towards the end of November, backed with a remix by Doc Daneeka. To celebrate this, as well as the label’s first birthday, they’ll be hosting Room 3 at Fabric, as part of the club’s own birthday celebrations on October 15. Brackles, Shortstuff, Martin Kemp, Scratcha DVA and Doc Daneeka are scheduled to play.

They’ve also teamed up to deliver their FACT mix, packed with unreleased cuts from the Blunted Robots camp and future label material from Terrible Shock and DJ Dom. If that’s not enough, we’d also point you to the Robots’ newly-inaugurated YouTube page, where they’ve uploaded their past singles as well as some unreleased curios.