Today, we’re giving you a chance to win one of the deluxe copies of Machinedrum‘s Many Faces album. Only 100 exist in the world.

Released a few months back on LuckyMe, the deluxe version of this record by New York electronics don Travis Stewart comes on 12″ vinyl, and comes packaged with a t-shirt (see below – in this case it’s a large, but they fit snug), and a cassette of Machinedrum’s Brooklyn Fuzz-Rock album, recorded under the name TStewart.

There are very few (like, two or something) of these left in the LuckyMe webstore, and one available here. Drop us a line with the title ‘LuckyMe competition’ on competitions@thevinylfactory.com and you’re in the draw. 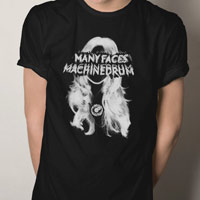