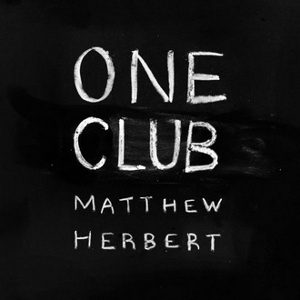 The second in a trilogy of albums each based on material from a different single source, One Club sees the restlessly inventive Matthew Herbert making music from sounds recorded at the celebrated Offenbach techno club, Robert-Johnson: a comparatively mainstream concept compared with trilogy opener One One (based only on sounds made by Herbert’s body) and the forthcoming One Pig (source material: as it says, one pig!), or indeed with earlier, politically-motivated recordings such as Mechanics of Destruction (as Radio Boy) or Plat du Jour.

Yet the application of Herbert’s undoubted, not to mention classically-trained compositional skills – as well as the aleatory methods he adores – to the most cutting of cutting-edge techno sounds, as well as a variety of other “club” noises (whoops, hollers, flushing toilets, footsteps, slamming doors) produces a vibrant document of a particular place and time, a kind of audio vérité snapshot of one strand of contemporary electronic dance music – it certainly beats a live recording from a mixing desk any day.

One Club begins with “title track” ‘Robert Johnson’, a manic four minute workout replete with car alarm synths, clanging metal percussion and what sounds like pool balls being potted –strangely thrilling and curiously reminiscent of 1980s electronic body music pioneers, Die Krupps. Other tracks are named after people Herbert met at the club in Germany, continuing his long-time focus on blurring music and its means of production. ‘Jenny Neuroth’ builds from a loop of crowd noise towards a “classic” club crescendo, but the drop takes the track in a completely new direction – manic mining music from some 21st century hall of the mountain king.

‘Alex Duwe’ starts with the sound of ice being put in a glass and fizzy drinks being poured over it, noises that recur periodically in this playful and percussive piece, full of distorted whistles and the occasionally chiming clock. ‘Oliver Bauer’ maintains the high tempo and intensity level, highlighting  Herbert’s noted beat-programming skills, which could twist dancers into almost juke/footwork levels of dexterity.

‘Marcus Bujak’ is the first of three tracks to feature vocals prominently – the three best tracks as it happens – its wordless chorus of voices lead into an enchanted of arpeggiated techno synths with the warmth of brass and the breathiness of woodwind.  This is followed by the song proper, ‘Marlies Hoeniges’, whose polyrhythmic intensity and call-and-response massed choir give it a strongly West African flavour at the same time as it remains intensely Frankfurt in its techno rigour. An amazing track.

After the dizzying variety of ‘Marlies’, ‘Nicolas Ritter’ and ‘Jalal Malekidoost’ seem slightly one-dimensional at first, each digging a groove to exceptional depths. Yet Herbert’s take on minimalism is packed with such detail and dynamics that the comparative rhythmic stasis is no hardship. Indeed on ‘Jalal Malekidoost’ he takes the opportunity to push the listener’s tolerance of ‘noise’ within the context of melody (distortion, break-up) as far as he can without completely losing it (or you). ‘Raffik Dahhane’ layers distorted church organ over clack-and-hiss industrial techno of almost gabber-esque velocity and intensity  – and poing noises.

Wrapping things up, the anthemic ‘Kerstin Basler’ (“We are everything, we are everyone”) shows the full range of Herbert’s talents – a chugging, eminently danceable groove, contrapuntal call-and-response vocals, melodic invention, chance moments, sound art elements and a conceptual, political and ideological underpinning of which Cornelius Cardew would have been proud.

Matthew Herbert’s theorising has drawn comparisons with Lars von Trier and the Dogme 95 movement. But whereas von Trier has a Palme D’Or to his name, Herbert remains a respected figure but one whose talent has yet to receive all the critical plaudits it deserves (albums of the year poll wins, Mercury Prize/Turner Prize nominations, and so on). One Club may not break that cycle, but it adds one more piece to an artistic legacy that grows stronger by the year.