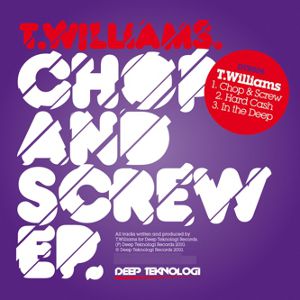 T. William’s music is infectious and hypnotic. When listening to the Deep Teknologi man I find myself descending into a sort of nodding trance which after a while borders almost on delirium, but then something else is subtly dropped into the mix, I remember where I am and I am back to where I started. Repeat ad infinitum.

Chop & Screw, the EP as a whole, is skeletal in its composition. There’s a real sense of every fundamental part and component being laid bare and given its own space in which to sound. It’s also bold, brimming with drive and focus, and to my ear there is a definite crossover in this release between the more raw UK House sound, so prevalent at the moment, and the more polished big-room European house styles. Chop & Screw sounds sleek and expensive.

Without a doubt the standout track on this EP comes in the form of ‘In The Deep’. In the opening two and a half minutes the track builds up and up, laying down subs that swing beneath the beat; sounding roughly like they’ve grown out of the back of your head, they’d make you feel off balance if it weren’t for the pause and relief provided by the track’s breakdown. Unfortunately I’ve not had the pleasure of hearing it over a large club system yet, but I can only imagine that it would be wildly effective.