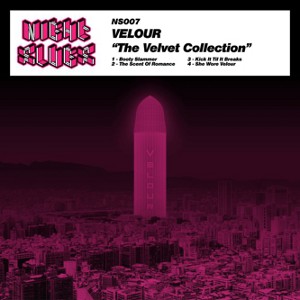 Velour is the alias of a pair of producers with roots in UK house and dubstep who are collaborating incognito. Now, as much as it would be fun to enter into a bit of speculation about the names behind the moniker at this point, unfortunately, well, we know who it actually is. Far be it from us to spoil the fun though, so rather than share the knowledge with you we’ll just leave it up to you to work it out.

What we will say though, is that all the clues are there in these tunes. The four tracks that make up The Velvet Collection pull influence from a blend of tech-house, UK funky and the more recent ends of dubstep. It’s a sound that is very much of-the-moment; all pulsating bass lines, sparing use of a vocal samples and bubbling synths.

There’s a thick layer of ‘80s-esque, sexually-charged sleaze to the EP too; from the track titles (‘Booty Slammer’, ‘Scent of Romance’, ‘She Wore Velour’), the late-night vocal samples, the colourful melodies – right down to the hugely phallic pink cityscape on the EP’s cover.

Yet while Velour’s sound is very slick, accomplished and on-trend, there’s nothing on this EP that particularly stands-out. It’s not a huge criticism – as a whole it’s a consistent and enjoyable collection of tracks – but merely very good, not quite essential listening. That said, it’s certainly enough to make us hope that Velour are more than just a one-off novelty project, and that there’s more to come from this enigmatic duo.