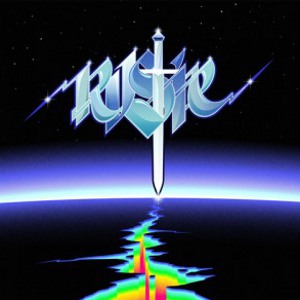 It’s no holds barred for this, Rustie’s debut EP on Warp. The cover art for Sunburst – heavy metal  typography and a Claymore rendering a rainbow-coloured gash in the surface of some barren planet – sets the tone for the prog – and metal-inflected future funk inside.

Lead track ‘Neko’ opens with warm yet plangent, tense yet airy keyboard riffs that vaguely remind me of the cloud city scenes in The Empire Strikes Back. Or at least if Lando Calrissian had a crunk-loving teenage son, that is. Forty-two seconds in Rustie drops the chorus: a monstrous bombastic riff, as suitable for headbanging as dancing. Then follows a section that wouldn’t be out of place on a FunkinEven track, delicious Worrell-esque keyboards and crisp beats, before the chorus kicks in again, eventually mutating into count-the-notes-and-chord-changes math-rock wizardry, but framed within Rustie’s immaculate sonic palette rather than indie palour. Fun, contemporary and innovative in one fell swoop.

‘Dragonfly’ is as dense with detail but rolls rather than rocks, upping the tempo with ominous arpeggios, buzzing, darting splashes of colour and processed snatches of some unidentifiable R&B vocal. ‘Beast Nite’ revolves around another heavy riff, played on “purple” sounding keyboards, interspersed with what sounds like a 22nd century pastiche of lute music. Yelps and yet more neoclassical metal complete the picture.

‘Chew’ runs tuneful interference patterns over wonky beats; massive quantities of notes in the mid-range, while a simple 8-bit bassline appears below and a delightful sparse melody floats on top. It’s only with the closing ‘Hyperthrust’ that Rustie briefly threatens to make a straight ahead banger, its prowling bass part irresistible on the dancefloor. But that would be too boring. Instead, the listener is propelled into a chorus of liquid keys playing a hyper complex metal riff, like something by Yngwie J. Malmsteen, over hyper-modern beats: massively propulsive fretwankery meets Hyperdub cool.

Joyful, playful and highly novel. With this dense and intense EP, Rustie is setting himself up to become the beats producer that Kerrang! fans adore.