20-year-old Jack Hamill instantly earned himself a cult following with last year’s ‘The Love Quadrant’ 12″, and has become one of 2010’s most hotly tipped talents on the back of his awesome FACT mix, a number of inspired live sets around the world and an excellent release on Clone’s Royal Oak imprint. The Belfast boy has a preternaturally advanced command of melody and arrangement, and makes use of vintage analogue equipment to render his ideas as warmly and three-dimensionally as possible. If you’ve ever been into Model 500, Prince, Lindstrom or Drexciya, then SDC is for you.

R&S describe Temporary Thrillz as containing “intergalactic slow jams, deep club excursions and mid-tempo space funk”, which is about right. This is SDC’s second appearance on the label, following his remix of Fabrice Lig back in July. The producer himself had the following to say about the new record:

Trapped in a time that is not his own on a planet he has only read about in history archives, Mr. 8040 is one of Planet Earth’s most famous residents.

Living in his specially constructed base in an unknown region of the Atlantic Ocean, Mr. 8040 is attempting to construct a time travel device to bring him back to his own time, the year 2352.

Not knowing how long he could be trapped in the past, Mr. 8040 has taken advantage of the musical laws of Planet Earth. In his time, music out of the ordinary is illegal in order to help control the citizens of Mikrosector-50. In this time, humans are free to listen, dance and luckily for Mr. 8040, make love to whatever kind of music they want.

By night, Mr. 8040 abandons his time travel device to DJ in clubs all over the planet. Inside these clubs are some of the most beautiful women you could imagine. For a Space Dimension Controller it’s a lot of temptation, but when it’s time to leave the club for his landing bay there can only be one.

This is the story of one of those nights…

A night when Mr. 8040 found a beautiful woman and promised her everything… A DJ booth where he contemplated ending his constant seduction of easy women… and an early morning where things returned to reality for Mr. 8040 and he made his exit, much to the sadness of the beautiful woman he was leaving behind…

Yes, for Mr. 8040 things are easy to get started, but at the end of the night he finds it hard to understand if it was worth it at all. He has tried to stop before, but he just can’t help it. For no matter how hard people try, you’ve gotta have those Temporary Thrillz. 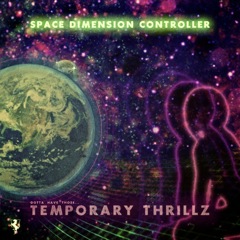