Mark McGuire: Living With Yourself 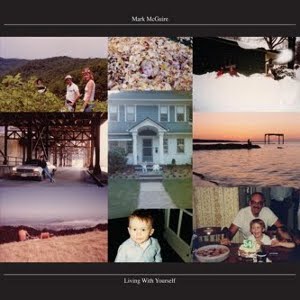 Most Americans, upon hearing the name Mark McGuire, will tend to think of that big, red, steroid-addled baseball star who shares the homonymous name  ‘Mark McGwire.’ Whereas, in appearance and lifestyle, the two men probably couldn’t be more dissimilar.  However, they both deal in some heavy Americana and play in very languid arenas.

Nostalgia is the operating force in Living With Yourself, the most accessible album yet from this Mark McGuire, of Ohio three-piece Emeralds. It’s not just more accessible because there will be a larger run than 300 copies either; specifically, the album gently etches an abstract, nostalgic womb-space through what feels like 40 tracks of just guitars or atmospherics, in which just about anyone can snuggle up. The record is almost beatless and vocal-less outside of the bookended opener and closer which include audio extracted from home movies. Its non-specificity creates space for any listener to inject his or her own narrative, and this is probably achieved by simply exploring something that most Americans in the last 40 years grew up with, the guitar.

This will definitely be read as a score to something, but it’s pretty open to what it could be: a road trip to your grandmother’s funeral, a high school car wash in slow motion, an afternoon with the kids who didn’t play football at the highschool in Friday Night Lights. Whatever the narrative, the ’90s loom large as the heavy in the room, but like the cliche goes, the angsty confusion of youth is better experienced through a slightly wiser, calmer lens.

The album opens with a middle class overture, ‘The Vast Structure of Recollection’, (a Proust reference, of course). We hear a general wala, a family gathering. Acoustic chords slowly start to emerge into patterns, becoming more intricate, layered, swirly, affected, meandering.  We are never treated with the arrival of a beat. The following tracks continue to vary the bittersweet, melancholic but assured tones of the opener, to different sub-genres of memory. ‘Moving Apart’ is the kosmiche/kraut benevolent music cue to the scene where the older brother character finds his voice. The wailing guitars of ‘Brain Storm (For Erin)’ recall that family tragedy you had in your teens.

For the album’s closer, ‘Brothers (For Matt)’, the vocal samples return.  An adult and two boys share an interchange, hosting a fake radio show (you know, just like the one you had), the details of which are partially obscured. We presume this is a father or uncle talking to Mark and his brother, as he warns the youngsters against girlfriends. Finally, a beat falls through a wormhole, straight from 1992 in the Midwest. It feels like the whole album has been leading up to this payoff, as the full rock ensemble is finally complete; the bass, drum, and guitars have at it, unabashed, for a good four minutes.  It’s impossible not to envision flannel, destroying someone’s mailbox, or a curious/overdue teenage sexual encounter. McGuire takes a couple of minutes to let us decompress, beatless again, as we open our eyes to our 20/30/40/50 something realities.