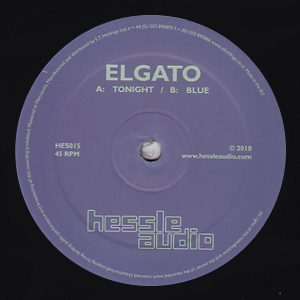 Leeds’ Hessle Audio imprint has clearly made the step up from inspiring upstart to minor dance music institution, but pinpointing exactly when this happened is difficult. Regardless, they have a knack for casually releasing bombs from relative unknowns, and Elgato is next in line after striking debuts from previous no-names like Joe and Blawan. Elgato is not new per se, a visible member of the Hessle crew for a while now, but Hessle 015 is his first actual release, and he certainly makes it count. It’s hard to reconcile that such a potentially career-defining release is only a debut.

The slabs of wan, extended funk stretched over these two sides of vinyl sound like Crazy Cousinz on too much cough syrup, with UK Funky-friendly percussion and grooves at a drastically reduced tempo. ‘Tonight’ is an absolute trip, burying sub-bass underneath an unstable mass of tiny drum machines as a distinctively “funky” rhythm taps in slow motion overhead. The vocal sample is cruelly wrapped around the gaunt track like latex, the only constant element as ‘Tonight’ goes through its evolution. Five minutes in and without warning the backbone disappears, and even the remaining percussive framework turns to dust in the face of the calm, ambient outro, which sounds more than a little like all this recent kosmische business, but viewed through the Underground Quality lens.

The flipside ‘Blue’ is a less acrobatic: layering the same sort of morose pads and wading codeine percussion, it desperately attempts to wring some semblance of progression out of the high-pitched trill that forms its backbone, but with no luck whatsoever – beats drop in and out as the sustained synth, frigid and choral, seems to drag on forever, betraying no breaks or imperfections in its stunning obsidian surface. The unwavering constancy is worrisome as the never-ending chord sadistically saps life-force from its listeners and turns a barebones Funky track into a hazy nightmare where the percussion is rendered peripheral, banging against some distant, unseen wall. When it finally lets up after seven minutes… who are we kidding, you’ll be hearing that synth ringing in your skull for days after experiencing ‘Blue’ just once.